GBPUSD had two way moves on Tuesday ahead of the Brexit House of Commons votes. The votes were overwhelmingly against the Brexit deal. The following looks at what could happen next from technical perspective.

January 16, 2019 | AtoZ Markets – Tuesday was a big day for the Cable as volatility heightened before and after the house of common votes. Before the votes were cast, intraday volatility was solely influenced by the headlines from the incoming House of Commons Brexit votes. Prior to the event, all cable pairs dropped massively with GBPUSD dropping more than 200 Pips to hit over one week low. Eventually, the House of Commons voted against Theresa May's Brexit deal overwhelmingly as the market expected. However, the record margin of 230 was bigger than expectation. Surprisingly, the cable bullied the bears to surrender as price went back covering all the pre-votes bearish ground.

Meanwhile, opposition leader, Jeremy Corbyn has asked for a vote of no-confidence on PM May which will take place on Wednesday. Will there be a May's exit followed by a general election? What about a new Brexit referendum? Will the UK get ready ahead of the official EU exit day? All these and more have created uncertainties. The next step concerning the deal still poses more risks to the market. What are the technical sides of this story? 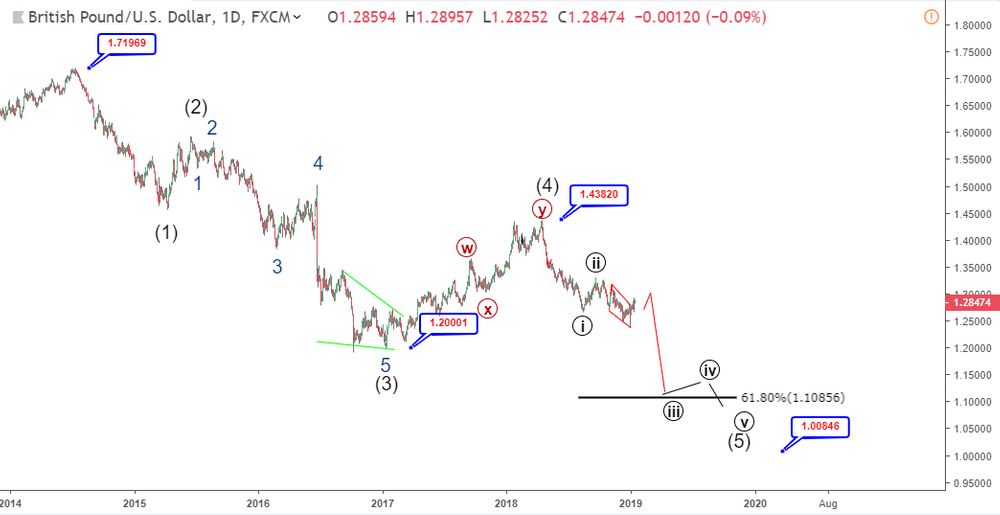 The story of the Cable is a bearish one since July 2014. A long term bearish trend emerging into an impulse wave is still in motion. The 4th wave ended at 1.438 early 2018 and price continued downside throughout that year. The bearish trend, from long term perspective, is in the 5th wave and looks highly likely to continue to 1.10 or even 1.10. The 5th wave from the wave count above has completed the 1st and 2nd sub-wave. The current bullish rally is expected to be limited below 1.33 – wave ii (circled) of (5). A bridge above would mean that the 2nd sub-wave has not yet ended. The long term trend is bearish and the certainties surrounding Brexit might aid this in the coming months.

Can USDJPY Hold Its Bullish Momentum and Reach 111.00 Key Area?
Forex Crypto
Top 5 Forex Brokers
Top 5 Crypto Exchanges
Your subscription could not be saved. Please try again.
Thank you for subscribing. You will be the first to receive all the latest news, updates, and exclusive advice from the AtoZ Markets experts.
Everyone is reading
SEC Lawsuit Against Ripple May Drag On Until 2022
Ethereum Facing Support Around $2,300 Price Area - Will Strike Upward?
Danske Bank Rejects Cryptocurrency Trading
close ×