Get VIP Trading Signals Market Watch
Trade Now Your capital is at risk.
The Cable breaks upside as the USD plummets on fresh trade concerns. The following GBPUSD Elliott wave analysis looks at what could happen next.

December 03, 2019 | AtoZ Markets - The greenback fell across the board on Monday. The same move has continued on Tuesday following fresh trade concerns. GBPUSD price is now close to breaking above 1.3 for the first time since late October. The market is probably looking away from the Brexit polls at the moment unless something drastic happens. However, further USD weakness should send the GBPUSD pair toward 1.32 after completing a sideways triangle pattern.

The debate between UK's Conservative and Labour parties continues ahead of the general election. As expected, Brexit remains the focus of their manifestos. At the moment, the market is responding bullishly to any upbeat news concerning the Conservatives. The Tories have now published plans to improve border security after Brexit. This has been one of the major concerns after negotiations concluded with the EU. If the polls respond more positively as a result of this, we should see GBP strengthen across the board.

Meanwhile, the US President Trump is expected in the UK today ahead of NATO summit. The USD and the Wallstreet started the week on the negative side following geopolitical complications. Doubts have increased over the completion of the initial trade deal between the US and China thanks to fresh disputes over Hong Kong human rights. In addition, the Trump administration has proposed about 100% tariffs against $2.4 billion of French goods. The new trade development is weighing on the USD. Hence, GBPUSD could break above 1.3 especially if the UK polls remain in favour of the Tories.

GBPUSD Elliot wave analysis: will the Cable break above 1.3 soon?

Technically, GBPUSD looks bullish. The rally from 1.196 is completing a bullish impulse wave pattern. The current move which started in late October is completing a 4th wave triangle. We have looked at this in the previous updates. In the last update, we looked closely at the triangle 4th wave with the chart below (Charting tools from TradingView). 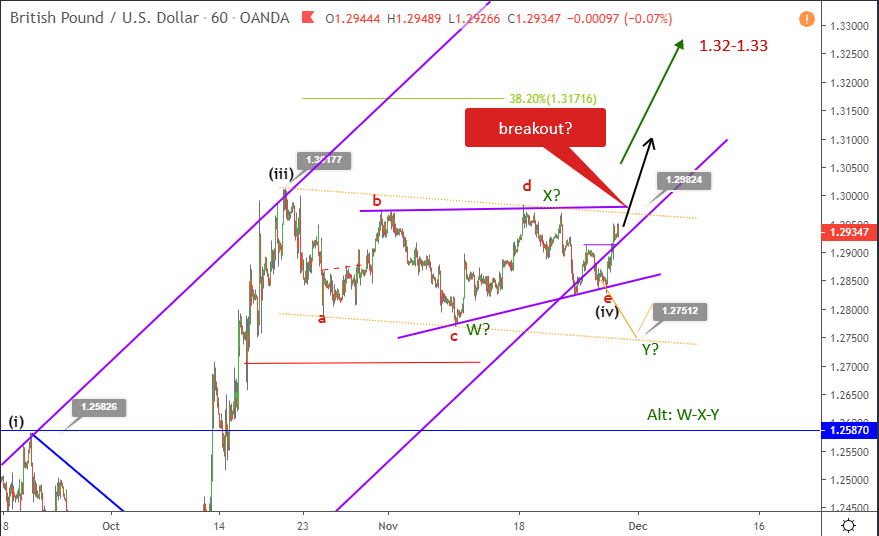 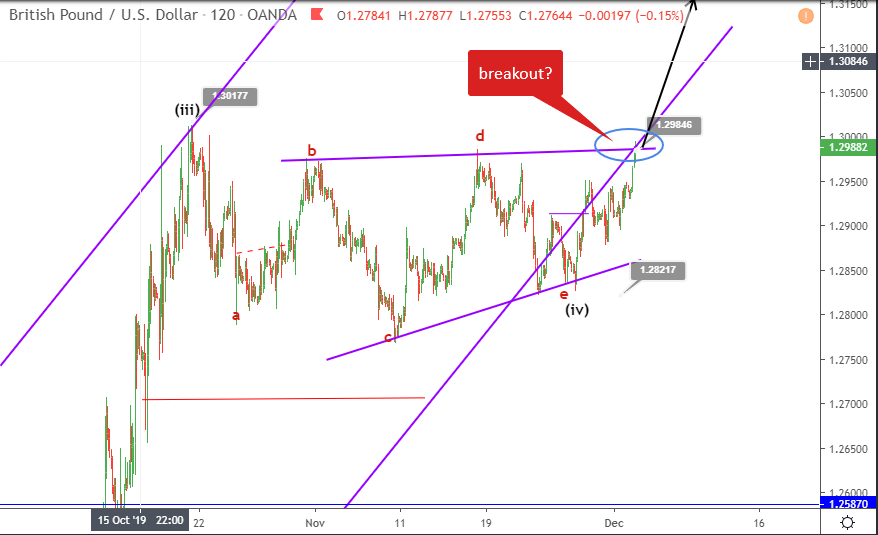 If the breakout is sustained, we should see the pair running toward 1.32 as the new GBPUSD Elliott wave analysis chart above shows.

Read Also: EURUSD Fundamental Analysis Ahead of US France Trade