The Pound still stays downside amid Brexit uncertainties. How could price prepare for next week MPs elections? The following give insights based on Elliott wave theory.

December 06, 2018 | AtoZ Markets – The UK House of Common began its long Brexit debate on Tuesday to vote for or against the deal the prime minister, Theresa May, had with the EU. The vote will come up on 11th December. The market is very much wary of this event and GBPUSD stayed rooted to the downside gyrating between 1.28 and 1.265. The Brexit by far, poses the biggest risk on GBP currency pairs. Later today, the U.S non-manufacturing PMI data for November will be released. The market expects the figure at 54.4, unchanged from October’s.

GBPUSD opened a bit above 1.27 but has dropped just back to the same support level. Price is now trading between 1.27-1.266 support zone. This price zone is expected to act as an important battle line as the Cable finds its next direction – up or down- which would be greatly influenced by the Brexit vote next Tuesday. If the Brexit deal is passed through, Sterling will surge very high above 1.33 as that would be largely unexpected. If the deal fails, there might be resignation of the PM, a call for another referendum or call for an adjusted deal with the EU. Any of these will cause a break below 1.266. This scenario is priced in and the downside move might be limited (depending on the vote gap) while the market waits for the next responses. 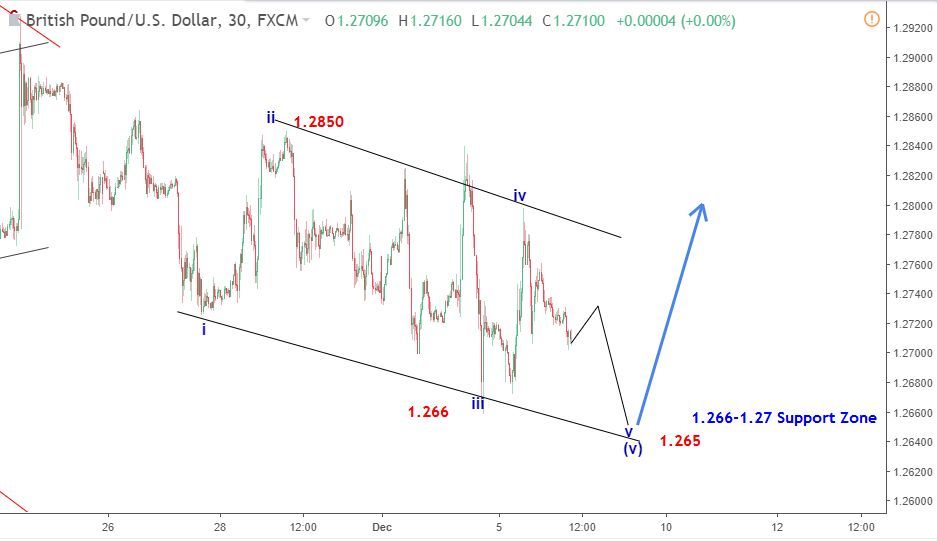 Just at the 1.266-1.27 support zone, an ending diagonal/wedge pattern is about to complete a bearish move from 1.317 (early November). This pattern is a reversal pattern which might start a brief correction to 1.28-1.2850 and even 1.2928 resistance level. A dip to 1.265 is expected today or tomorrow to complete this pattern. This pattern should however be taken lightly as next week vote is expected to cause huge volatility.

Tags Brexit Elliott wave analysis GBPUSD
Forex Crypto
Top 5 Forex Brokers
Top 5 Crypto Exchanges
Your subscription could not be saved. Please try again.
Thank you for subscribing. You will be the first to receive all the latest news, updates, and exclusive advice from the AtoZ Markets experts.
Everyone is reading
Is Forex Trading Halal or Haram in Islam?
Top 5 Forex MT5 Indicators for 2021 you should try
Top 5 cryptocurrencies 2021 | Best Cryptocurrency To Invest
close ×