GBPUSD fell sharply last week after the Brexit deal hit another roadblock. What are the the technicals saying? The following gives insights based on Elliott wave theory.

Prime Minister, May, had just had a successful Brexit negotiation with the EU but the resignation of some members of her cabinet including the former Brexit secretary Dominic Raab served a big blow. Despite these resignations, the prime minister seems to be determined to get the Brexit deal to a vote in the house of the commons. There have been calls for vote of no-confidence against her from some angles claiming her deal betrays the Brexit purpose. The Brexit deal still remains the major risk concern on the Sterling. All GBP pairs dropped massively last week. Despite last week Dollar weakness, the Cable couldn't gather enough bullish momentum as the Brexit weighed in heavily.

Meanwhile, this week, price is moving around 1.2850 after the bullish recovery from 1.2725 couldn't get near the 1.292 price resistance level. From technical analysis perspective, the Cable still looks bearish and might crash below 1.266 support. At the end of today, the market would focus on tomorrow's UK inflation report hearings. 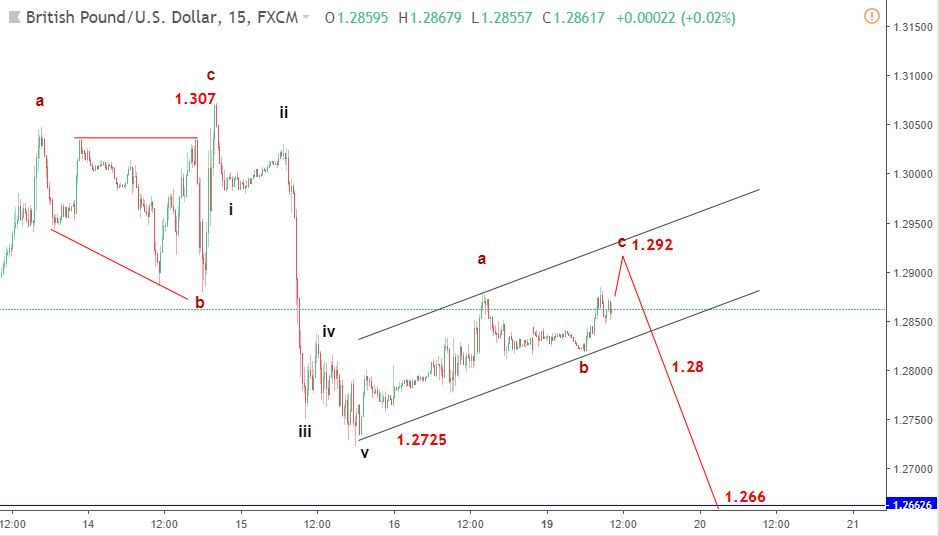 The last week drop from 1.3070 to 1.2725 printed a bearish impulse wave after a zigzag corrective pattern. From 1.2725, price action has been corrective. This shows that the market is still wary and cautious of more negative Brexit headlines. The current rally might continue to 1.292 intraday resistance. If price eventually stays below 1.292 and breaks below the intraday corrective channel (below 1.28), we would most likely see it retest 1.266 and even drop below. On the upside, the bullish move might morph into a trendy rally. A break above the corrective channel (above 1.292-1.295), might lead to a re-touch of 1.307 and above.