The Cable is dropping off the 1.32 critical level as Brexit debates continue. The deadline date is drawing closer. The following GBPUSD Elliott wave analysis suggests the bearish correction might continue toward 1.27 or lower.

January 07, 2020 | AtoZ Markets - The price pattern emerging on the GBPUSD chart is clear. There is now an expectation that the dip from 1.3515 will continue lower to test December 2019 low and even break below it. The December parliamentary elections shot the currency pair far to the upside to 1.3515. Meanwhile, the market didn't stay at the top before making a fast dip to 1.29 prior to the last week of December. A quick surge quickly followed to 1.33 in the last week of 2019. With the recent surge, we now have critical resistance levels at 1.33 and 1.3515 that the bulls must breach before returning upside. However, it seems the market will be more attracted to the support levels at 1.29 and 1.275 in the short-term.

In 2019, the currency market was more driven by geopolitical influences than anything else. The Brexit, US-China trade war and easing Central Bank policies were at the front of the biggest moves in the market. The phase one of the US-China trade deal will officially be completed in mid-January while the Brexit deadline has been set for January 31. After last month UK parliamentary elections, the talks of a hard Brexit is having a cautionary effect on the market. Thus, the bullish trend is becoming weak. Meanwhile, according to reports, the UK will start trade talks with the EU, US and other countries as soon as it exits the bloc on January 31. This means that after the deadline, attention will be on UK trade talks. In the meantime, the market will focus on the US employment data coming later this month.

GBPUSD completed a bullish impulse wave from 1.195. The wave pattern ended at 1.3515. According to the Elliott wave theory, a 3-wave correction follows a 5-wave trend. This is already happening as the GBPUSD price completed the first leg of the bearish correction at 1.29. In the last update, we used the chart below to check the wave development (Charting tools from TradingView). 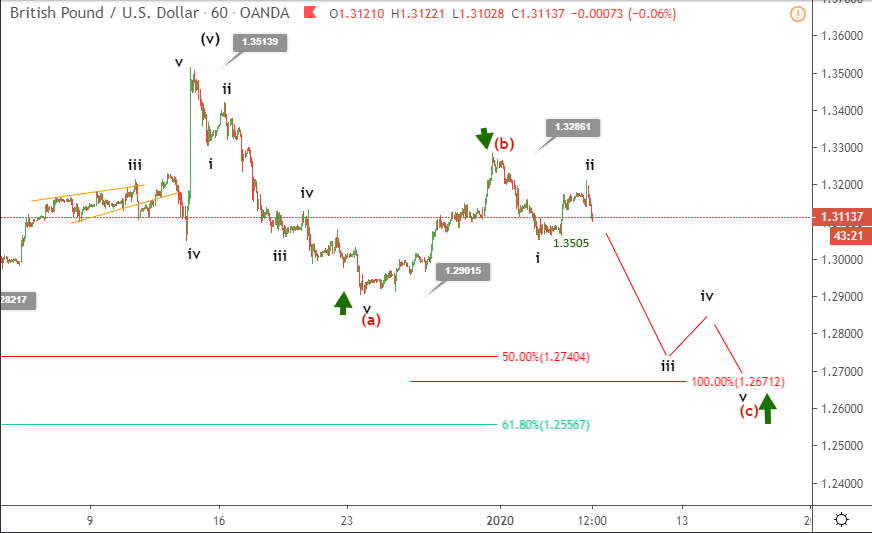 Wave i and ii of (c) seem to have completed. Wave iii should then break below 1.3505 to continue the bearish correction from 1.3515. Further downside effect below 1.29 is very likely before we look for bullish reversal signals at the 1.275-1.267 Fibonacci support zone. However, the price might also hit 1.255 (61.8% Fibonacci retracement level).

Read Also: EURUSD Fundamental Analysis Ahead of US ISM Data