The Sterling could rise 3% if Brexit negotiations go through according to a poll by Reuters.

April 05, 2019 | AtoZ Markets – The Brexit stalemate is taking new turns every month and it looks as if a deal will never happen. Meanwhile, according to a Reuter poll, GBPUSD could rise 3% if the gridlock is resolved and Britain is allowed to leave the EU with a deal. However, if the negotiations fail, Sterling will tank 5%.

The Brexit has been a major risk concern for GBP traders. Since the June 2016 referendum and a date fixed for an exit, the currency has reacted wildly to Brexit headlines. Three years after the referendum, the country is still unclear how or when or even if it would quit the Euro-zone league of nations. Prime Minister May has seen her agreements with the EU turned down by the MPs in a series of House votes.

There seem to be three possible outcomes now according to a Reuter Brexit poll conducted this week. If all road is clear for Britain to leave EU with a deal, the Sterling will gain 3% according to the poll answered by selected foreign exchange strategists. The same poll predicted that GBP will tumble 5% if negotiations fail. There is a third option:

”Another option is that Britain asks for a long delay to Brexit which would prolong the uncertainty. But if it looks like the road out will be extended, the Pound will edge up around 1.75%”

The poll also revealed that a wider poll of nearly 70 Forex strategists expected Pound to hit $1.32 in a month, $1.35 in six months and $1.38 in a year. This also reveals that a large number of respondents expected an orderly Brexit. To the downside, however, a 12-month forecast of $1.27 to $1.56 was made if the uncertainty is extended. 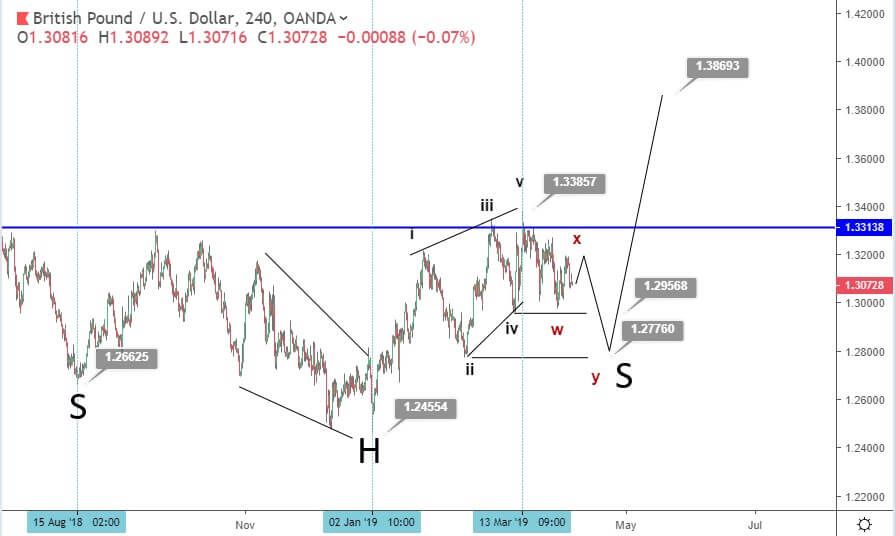 The technicals also support a bullish Sterling from a successful Brexit outcome. A large head and shoulder pattern from July 2018 is emerging. The second shoulder might not have completed yet despite the 14-15 February 1.277 hit. Price is currently being resisted from breaking above the 1.33-1.335 neckline after two failed attempts on 26 February and 13 March. There might be a retest of 1.277-1.266 support zone before a wild bullish move

From Elliott wave perspective as well, a long term bearish impulse wave ended on 2 January at 1.245 with a sharp ending diagonal pattern. A 3-wave bullish correction should follow. How far has that gone? For over 2 months later, price completed a leading diagonal which is the first leg of the correction – say wave a. The dip from 1.338 is looking complex and might drop further below 1.295 to 1.277 to complete the 2nd leg – say wave b. A big rally should follow to 1.38 or more.

These two technical methodologies support a near-term dip to 1.277 and its neighborhood before a big surge. These narratives fit a successful Brexit exit. An extension might happen, prolonging the uncertainties and see the price gyrating from headlines. A deal should finally be struck and raise prices. This is a prediction but the final Brexit outcomes will be the decider. We will see how Brexit unfolds in the coming weeks and months.