UK Prime Minister survived yesterday’s vote of confidence to remain the leader of the conservative party for at least another one year. Sterling is up by 200 Pips. What next? The following give insights based on Elliott wave theory.

December 13, 2018 | AtoZ Markets – GBPUSD has been on the rise since yesterday prior to the vote of confidence to decide if PM Theresa May would continue as the conservative leader. Prior to the vote, majority of the conservative MPs have shown their support for May and so she was expected to cruise to victory. GBP was already priced in, when the result was announced and so the move was minimal thereafter.

Cable has been very much bearish this year after a strong Dollar and Brexit uncertainties. Price dropped to 1.2477 this month to hit its lowest since April 2017. However, price has rallied back to 1.266- 1.27 zone. The bullish recovery might continue into the 1.27-1.285 congestion zone before price decides where to go next. 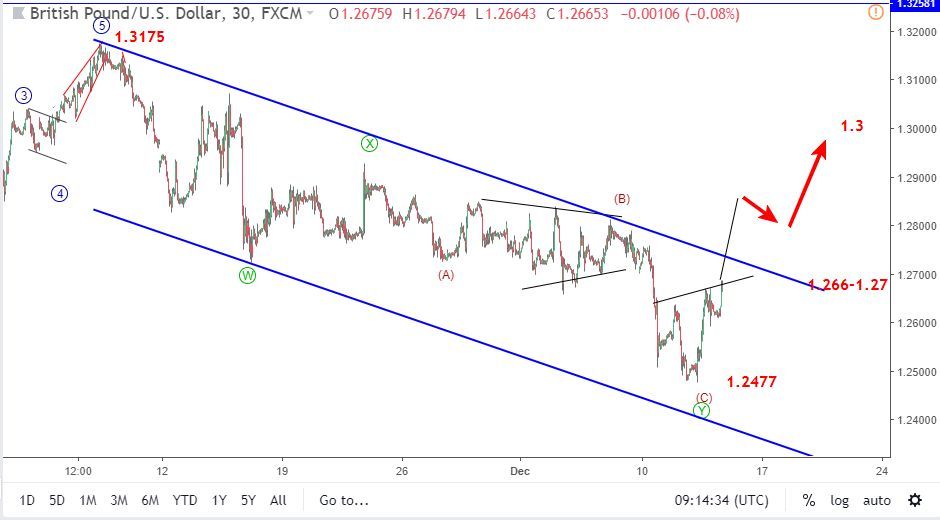 The last bearish swing happened between 1.3175 in early November and 1.2477 attained yesterday. However, the dip looks corrective and has completed a double zigzag pattern within a channel. At the base of 1.2477, there appears an intraday head and shoulder reversal pattern giving more bullish clues. A break above the upper line (or 1.27) of the blue channel might lead to further rallies to at least 1.3 before the bears continue. The long term trend is still bearish and price might just be making a complex bullish correction. While the market awaits November Fed minutes, the Brexit is still a big concern among traders and investors of Pound Sterling.

Tags Elliott wave analysis GBPUSD
Forex Crypto
Top 5 Forex Brokers
Top 5 Crypto Exchanges
Your subscription could not be saved. Please try again.
Thank you for subscribing. You will be the first to receive all the latest news, updates, and exclusive advice from the AtoZ Markets experts.
Everyone is reading
Is Forex Trading Halal or Haram in Islam?
Top 5 Forex MT5 Indicators for 2021 you should try
Top 5 cryptocurrencies 2021 | Best Cryptocurrency To Invest
close ×