October 2018 | AtoZMarkets – UK’s finance chancellor, Philip Hammond declared an end to the era of austerity in yesterday’s last budget speech before Brexit. In a speech which last for more than 70 minutes, Mr Hammond announced a slight increase in growth forecasts, from 1.3% to 1.6% for 2019 and a better-than-expected borrowing figures. Prior to the event, he warned that there might be a need for an emergency budget if Britain leaves the EU in March without a deal. Meanwhile, the office of the Prime Minister has put down the idea of emergency budget irrespective of Brexit.

GBPUSD has refused to be lifted despite the budget speech. Price which went a bit above 1.28 yesterday has returned below it, dropping below 1.2785 September low, eyeing 1.266- August low.

In the last update, prior to the budget speech, we had a bearish scenario heading to 1.266 support. The chart below shows the new update. 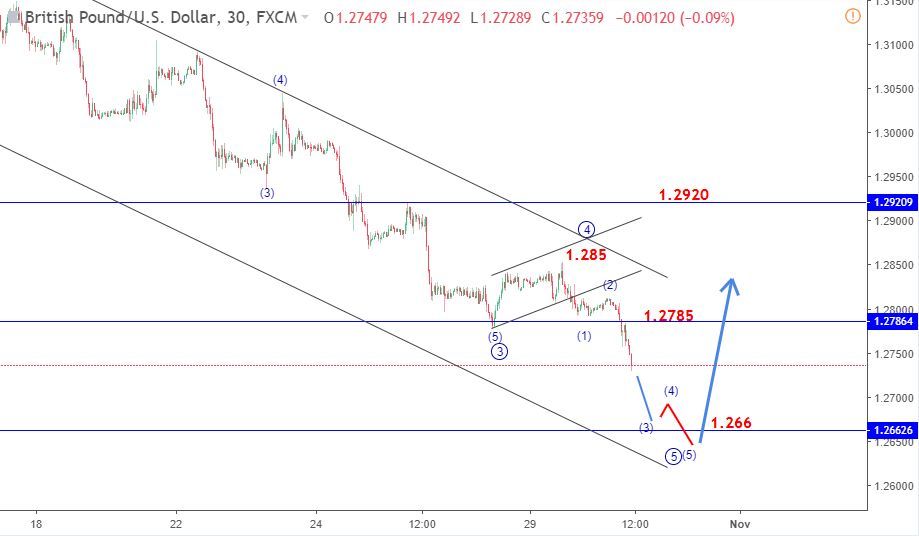 The bearish impulse wave started early this month at 1.326, breaking below 1.292 and 1.2785 previous multi-week lows. The next level downside is 1.266 where the impulse wave pattern might rest, consolidate and push downside, or push for a bullish correction. Price is at the 5th wave of this impulse wave pattern as the chart above shows. The trend is downside but might be limited at 1.266.

Fed: The Taper Will Have a Reduction–The Rates Will Not Go Up
Forex Crypto
Top 5 Forex Brokers
Top 5 Crypto Exchanges
Your subscription could not be saved. Please try again.
Thank you for subscribing. You will be the first to receive all the latest news, updates, and exclusive advice from the AtoZ Markets experts.
Everyone is reading
The Legal Battle Between the SEC and Ripple Continues
Binance Cancels Cryptocurrency Trading in Australia
Cryptocurrency Market-Experts Make New Predictions
close ×