The British pound has continued to decline against the US dollar during the European session as the pair gives back recent trading gains.

20 August 2019 | SQUARED DIRECT – The Pound was under pressure yesterday after Boris Johnson reiterated that preparations for a no-deal Brexit are on track, despite a leaked report warning of potential food and medicine shortages. In addition, the new PM’s four-page letter concerning alternative way for Irish backstop and Brexit deal renegotiation was firmly turned down by the EU.

The report also mentions that the PM spent a few hours talking with his Irish counterpart to persuade him for the deal but failed to get any positive response. Despite all this negativity, the Sterling is still finding a bid above 1.21 as the US President and Malaysian Prime Minister Mahathir Bin Mohamad showed upbeat response towards their future trade relations with the UK after Brexit. With the current mixed market sentiment, the Cable will likely remain in a consolidation today until further Brexit update.

The Sterling failed to break above 1.2177 as the bears took over and pushed price lower just above the 50-day moving average and the 1.21 support. The Cable will likely remain trading between 1.2177 and 1.21 in today’s session until price breaks to either side to confirm the next possible trajectory. 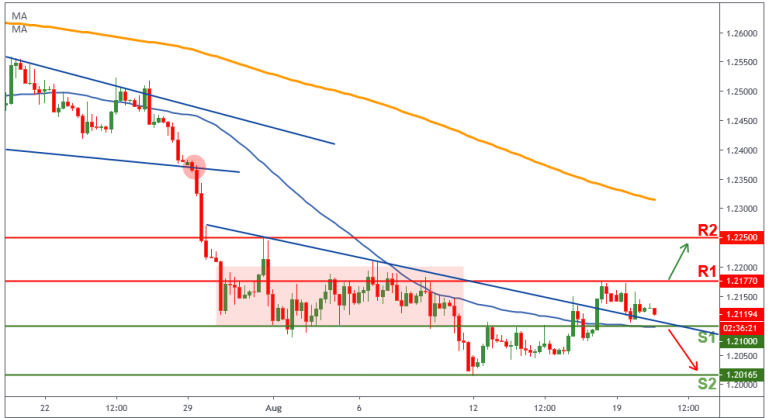 Fed Minutes Show the Possible Start of Tapering in November