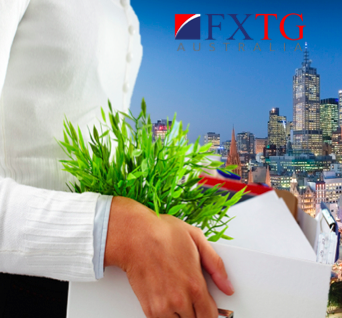 AtoZForex.com, Amsterdam — The Australian retail brokerage FXTG organisational restructuring has raised some questions, as its employment and lay off policies is quite odd. Making it for an outsider confusing and wonder in what state the Australian retail firm is currently under. Especially now it has been reported that six account managers at its Australian headquarter has been laid off. However, more impacting is the fact that various senior management positions of the Australian retail FX broker has been terminated or relocated.

Summing up the key of events it’s crucial to relate back to the enactment of the firm, in order to have a chronological overview of the recent sudden developments. Basically, FXTG was enacted in 2009 and at the time the firm held a license of FCA’s predecessor, while being located in London. Of interest is that the Israeli service provider Dealserv established FXTG. Soon after FXTG’s establishment in the UK, the firm decided to cancel its UK license and applied for the Australian reputable AFS license and relocated to Melbourne, while having CEO Yossi Ashkenazi in place.

All seemed good until the insolvency of parent holding Dealserv, which resulted into the takeover of FXTG and Sky FX by Aviv Talmor in the summer of 2014. From this moment on the entire corporate direction was dismissed at FXTG and required build up from the scratch again. The same case occurred for the fomer subsidiary of Dealserv Sky FX. At the subsidiary Sky FX, Mr. Jonathan Frankenstein took place as CEO, while at FXTG Mr. Stavro D’Amore was installed as running CEO. The reign of Mr. Stavro D’Amore over the new FXTG was not of long term, as month ago he resigned, due to personal matters of “taking a break”. For direct replacement, the industry expert Mr. Elias Morales was appointed CEO for the time being at FXTG. Bringing in knowledge and experience from previous senior roles at BNP Paribas, GFT and CMC Markets, Mr. Morales was deemed to be a qualified candidate for replacement.

Yet, in reality this was a contrasting matter since Mr. Elias Morales took this role for only a very brief period, which lasted a few weeks, not even completing a month. In a publicly made statement of the FXTG senior management, the firm has clarified the ongoing restructuring and the reasoning behind the dismissal of the quite recently appointed CEO: “Elias Morales was an interim CEO and was never permanent, and operations are still running here.”

Alongside this dismissal, the CEO at Sky FX, Mr. Jonathan Frankenstein has left the subsidiary, while the group’s PR Director Mrs. Tanya West also said good bye. On top of this matter, the current Global Vice President of FXTG, Mr. Rafael Bar is facing a potential relocation to Cyprus assuming a different position. Having concluded the many dismissals of senior positions, together with the six account managers being laid off at the Australian Headquarter, it is evidently that FXTG organisational restructuring raises questions of the outside world.