2 October, AtoZForex.com, Lagos – FXCM faces difficult times ever since the SNB event at kick off this year. Following the recent decision of a 1-10 reverse stock split supported by 93% of the company’s shareholders in a voting at the annual general meeting, the firm hit the headlines again over a hacking incident.

The result of the hacking incident? A drop to a new all-time low of $6.50 in the first 20 minutes of trading on Thursday. Ending the day about 8% down at $8.01. After a recovery, FXCM’s share is still at a low closing price, trading currently at $8.22.

The firm’s publicity of the hack which saw client information compromised and even some wire transfers initiated, could not have come at a worse time. Even though all affected client funds have been returned to the respective accounts, the full extent of the damage cannot be fully ascertained, besides the obvious FXCM stock selloff. 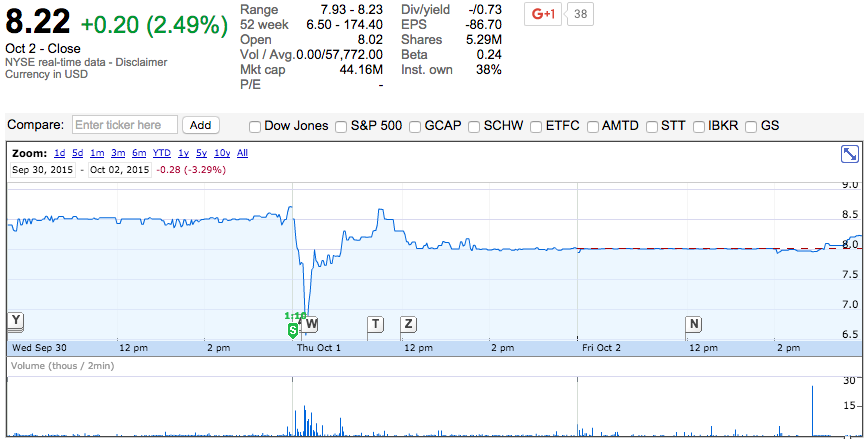 Cyber attacks are common in finance world, mostly in banking industry. However they are not that common in Forex industry, excluding minor ML and stealing CC details. According to FXCM official statement the company received an email from a hacker who claimed to have access to FXCM client data and information. As such access could potentially jeopardize clients’ sensitive information security, the company has notified the FBI of the threat.

As the FBI FXCM Cyber attack investigation continues the company has also announced that they are have launched a full investigation, working with a leading cyber security firm. The investigation covers the incident and aims to protect customer information.

It’s widely known that the firm had to sell some of its subsidiaries to meet up with debt obligations, post the SNB event. Recently, is was also announced that the re-introduction of the B-book model, which it previously ditched to go full A-book.

The dealing desk has been reintroduced to cater for clients who open accounts via the London based subsidiary, FXCM UK. Clients where officially notified of the new development via email. With large debts still looming from the aftermath effect of the SNB disaster of January 15, 2015, where it incurred about $265 million in losses. The company is forced to seek more streams of income.