FXCM shareholders have been invited to take part in a possible class action law suit against FXCM as law firms specializing this field of law are reported to be sniffing around the company.

After FXCM Inc (NYSE:FXCM) shares crashed about 90% last week over huge losses recorded during the Swiss debacle, almost sending the firm into bankruptcy before being rescued by Leucadia. Trading activities on Wednesday saw shares of FXCM rise 46% to close at $2.33, the highest daily gain recorded since its deal with Leucadia  National Corporation.  Its shares have been in gradual recovery after the bailout, but many shareholders are yet to fully grasp the circumstances and effect of the deal on the big picture. 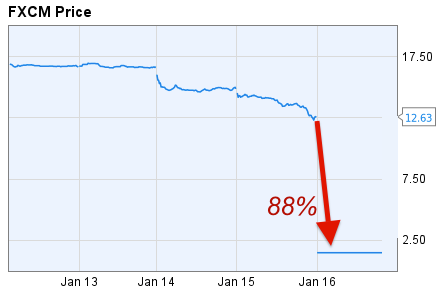 Evident from an announcement, the case against FXCM stems from perceived misleading of the investing public by not fully stating the risk faced by the company from the potential for negative client balances. A matter which is has imploded and eventually led the company to seek a financial lifeline from Leucadia after FXCM announced that it may be in breach of regulatory capital requirements as a result of clients experiencing significant losses from the Swiss National Bank’s decision to abandon the franc’s cap against the euro and translating to $225million in negative balance on these accounts.

In a recent 10-K filing with the SEC, FXCM states that:

“We believe that as a result of implementing real-time margining and liquidation processing, the incidence of customer negative equity has been insignificant.”

According to CNBC, The Rosen Law Firm is investigating a potential class action lawsuit to recover losses suffered by FXCM investors. If you purchased FXCM stock on or before January 16, 2015, this might be your chance.

The Rosen Law Firm is just one of many law firms looking into the case, some others include Levi & Korsinsky, Tripp Levy.