Fundstrat’s Tom Lee shares his bullish 2020 Bitcoin price outlook, which comes in line with his previous prediction. How did he come up with the figure for the future Bitcoin price?

19 March, AtoZForex – Tom Lee, the famous Bitcoin bull, has once again shared his Bitcoin future outlook with the public. While the co-founder of Fundstrat Global Advisors is generally positive in regards to the pioneer cryptocurrency, he has not changed his position even in the most recent remarks.

The latest Bitcoin price forecast from Tom Lee prognoses $91,000 by March 2020. He has based his Bitcoin outlook on a chart that indicates Bitcoin’s performance following the past market dips. Mr. Lee and Fundstrat have used an average of the percentage gained at price after each dip to come up with the 2020 Bitcoin price figure. 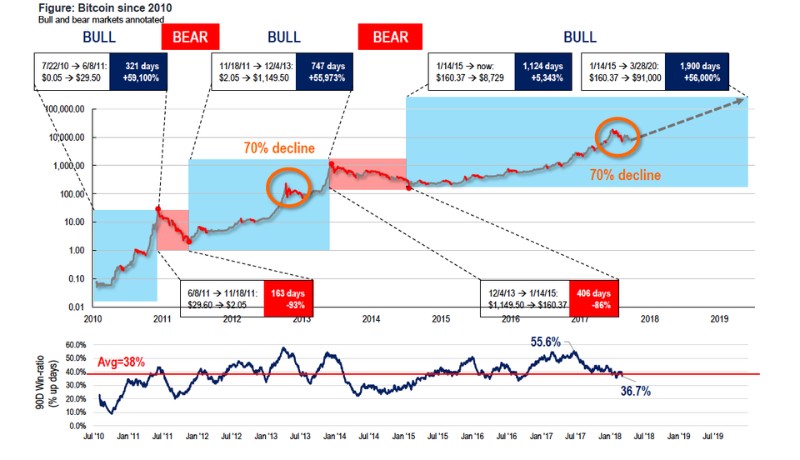 Some of the online reports note that due to the fact that the chart is based on a logarithmic scale and not the linear-based graph, Bitcoin price levels are not as distinctive.

Mr. Lee has been forecasting the highs for Bitcoin since the price of this cryptocurrency was below $3,000. Back in July 2017, he has stated that Bitcoin will reach $55,000 by 2022. Earlier this year, Tom Lee has stated that BTC has a potential to hit $25,000 by the end of the current year.

In the meantime, Mr. Lee also expects at minimum three publicly traded companies to issue their own cryptocurrencies in the course of 2018. Mr. Lee’s Bitcoin price forecast comes in line with his previous remarks he made in the very beginning of the year when he stated that Bitcoin can “easily double” this year.

In his statement, Mr. Lee has also mentioned the phenomenon of conventional companies creating their own internal cryptocurrencies. He has stated:

“Already three major companies have announced efforts within cryptocurrencies, which demonstrate that corporations may be moving towards cryptocurrencies before Wall Street has embraced them.”

In addition, Mr. Lee and Fundstrat have released the “Bitcoin Misery Index.” The index is a “contrarian index” that shows how “miserable” Bitcoin holders are at the current price.