Event
Add your event to our
directory.
Get $100K demo account Your capital is at risk.

3 February, AtoZForex – Today is the NFP day! Traders are anxiously awaiting the report from Bureau of Labor Statistics of the US. The data release is scheduled at 1:30 GMT, where the figures are closely eyed by the markets. The data serves as an important leading indicator of consumer spending, which accounts for a majority of overall economic activity.

I have reached out to some of the AtoZ Approved brokers in order to get their insights into the expectations and possible consequences of the NFP release.

One of the AtoZ Approved brokers’, Orbex, has shared its views in regards to the upcoming NFP report. The Chief Market Analyst at Xtrade, Paul Sirani, has commented on the January NFP:

The consensus 175K increase in Non-farm payrolls strikes us as a tad light. Xtrade is looking for 190K+. The ADP/Moody’s estimate earlier this week of private-sector payrolls growth in January was a banner 246,000, far above the 164,000 estimates. With improved methodology, the ADP metric now more closely tracks the NFP, motivating our optimism. Other supporting data include:

Moreover, Mr. Sirani has stated that the markets will begin pricing in an accelerated Fed rate rise schedule.

This afternoon sees the US non-farm employment report released at 1:30 pm GMT in what is commonly one of the biggest market moving events of the month. Expectations are for around 170k jobs to have been added in January after a reading of 156k previously. Despite this data release historically being volatile and often including large revisions to prior prints, the last five have been remarkably consistent and in the 150k-180k range. Wednesday’s ADP release – a private equivalent of the government’s data that is released today – is often seen as a precursor to the NFP and this smashed expectations of 165k jobs to have been added, coming in at 246k. 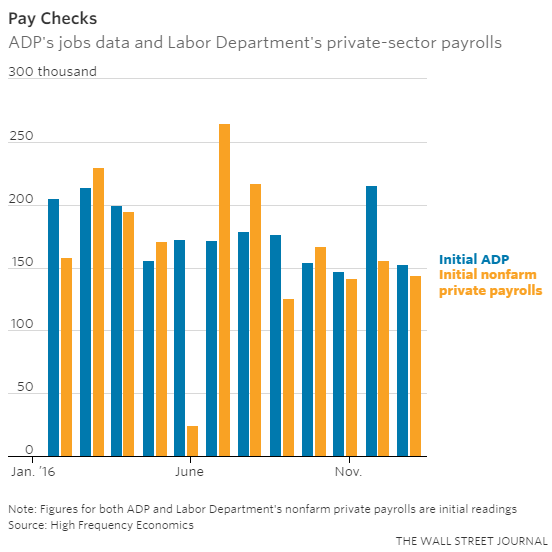 If today’s data is strong, then will Mr. Trump attempt to step forward and take the credit or will he refrain from comment? The president receives the jobs data prior to the official release and there is the possibility that he will be unable to refrain himself from firing out his customary early morning tweet, particularly if the figures are impressive.

James Harte, the market analyst with Orbex, has stated:

Not expecting a bumper print from the NFPs. With the economy around full employment, job growth has stalled over the last 7 months. A firm print of 150k + is still a positive for USD, seen as keeping the Fed on track to raise rates further this year.

His expectations stay at bearish 160k, in comparison with market consensus of 170K.