Gold price has faltered to 1300 ahead of today’s FOMC meeting. The following give technical insights is based on Elliott wave theory.

March 20, 2019.| AtoZ Markets – The precious commodity has failed to build on the bullish run that started on Monday to 1311. After completing a technical reversal pattern to 1310, price slumped below 1308 down to 1302-1300 support zone as the market focuses on today’s Fed’s rates decision and US economic projections. The commodity still remains under bearish pressures from 1346 late in February. If today’s FOMC projections favor the buck, we would see the dollar-denominated commodity falter further below 1292 to 126x.

The market expected the interest rate in the U.S to rise since the start of the year. But the Fed’s softness towards rates decisions has put bearish pressures on the Dollar which has led to Gold’s upward trajectory early in the year. Gold, however, dropped from 1346 after losing it ‘safe-haven’ advantage following news that the US-China trade deal would be achieved. The Fed rate is expected to be unchanged but positive economic projections including talks of a near future rate hike would increase the bearish pressure on the yellow metal.

Gold has turned bearish since yesterday after failing to break above 1311 intraday resistance. Today, the price dropped to 1300-1302 important intraday support. A sufficient break below 1300 will most likely lead to last week’s 1292 swing low. A dip to 1282 and 1260 will then follow if today’s Fed decisions favor the greenback.

From the Elliott wave perspective, the Gold price might not have completed the 4th wave of the bullish impulse wave that started at 1160. Early this month, the price was supported at 1280 following a fast drop from 1346. Corrective patterns often have three swings (legs) according to Elliott wave theory. The dip to 1280 was the 1st leg (wave a) and the rally to 1311 could be the 2nd leg. A dip below 1280 for the last leg (wave c) of the 4th wave dip is very much likely although today’s FOMC could change the look of that.

In the last update, we identified the possible end of the 2nd leg at 1311 with a zigzag pattern. Using the chart below, we also identified that the corrective wave b ended with an ending diagonal pattern. This wave analysis is currently playing well with the current price activities of Gold. The chart below shows a dip to 1300-1302 support zone. 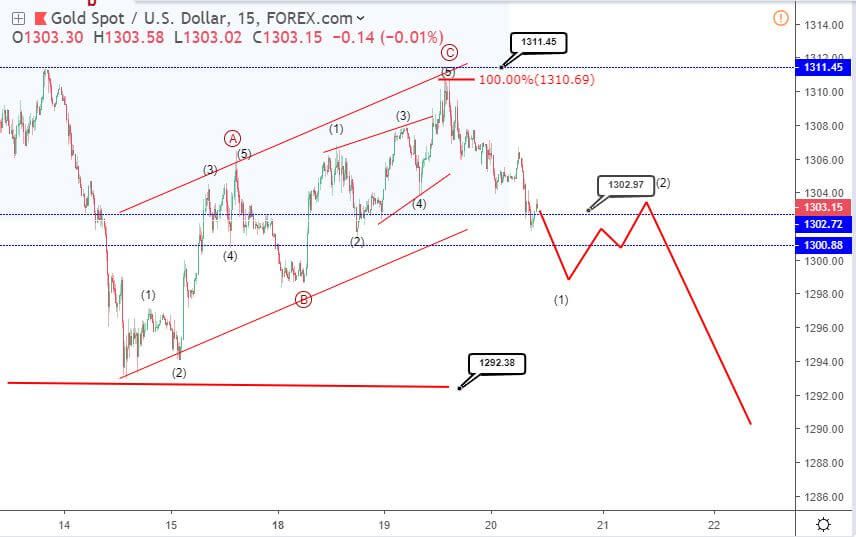 Ahead of the FOMC, the price will most likely break below 1300 lightly, retraces to retest it before it continues downside below 1292. However, 1311 still remains the invalidation price level for this forecast. A break above 1311 will invalidate this bearish scenario and we will have to take a new look at what price might do next.

Tags Elliott wave analysis FOMC gold technical analysis
Forex Crypto
Top 5 Forex Brokers
Top 5 Crypto Exchanges
Your subscription could not be saved. Please try again.
Thank you for subscribing. You will be the first to receive all the latest news, updates, and exclusive advice from the AtoZ Markets experts.
Everyone is reading
Top 5 Forex MT5 Indicators for 2021 you should try
Top 5 Cryptos to Watch in Quarter 2 2021
Bitcoin Facing Resistance Around $60,000 Event Area - What Next?
close ×