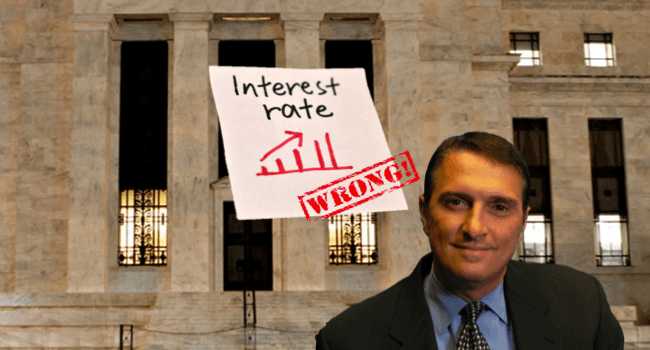 20 July, AtoZForex.com, Lagos – One of the major drivers of the markets at the moment is the anticipation of coming rate hikes. The Federal open market committee is getting set to raise rates for the first time in nine years since the global recession. The fed claim that a host of factors have informed their decision to kick start monetary policy tightening, some of which include stronger employment conditions, unemployment at a multi year low, moderate inflation and so on.

In a CNBC interview, Jim Bianco, President of Bianco Research aired his view about the real reason he thinks the Fed have finally decided to commence raising rates, rubbishing the idea of the apparent improvements in the economy as the major driver of the decision, as he believes that the Fed economy assessment is wrong.

According to his view, aired in the CNBC Squawk on the Street: “If you look at the third quarter of 2012, the Fed eased and gave us open-ended stimulus, I would argue that the economy is equal or worse than it was , but now they want to tighten. They’re raising rates because of their words, ‘financial stability.’ They are worried that the markets have been distorted. Now, they can’t say it that way.”

This opinion of Jim Bianco was made just one day after Fed Chair, Janet Yellen finished her two days of testimony before Congress. Interestingly, Jim Bianco’s opinions supported the USD to rally further, ending the week strong and the current strength is very likely to continue in the coming days.

Fed Chair, Janet Yellen told members of the House that the central bank remains on track for the first rate hike in almost a decade: “If the economy evolves as we expect, economic conditions likely would make it appropriate at some point this year to raise the federal funds rate target, thereby beginning to normalize the stance of monetary policy.”

In another remark of Jim Bianco, the President of Bianco Research opines that Janet Yellen’s characterisation of the economy is inaccurate. As a matter of fact, Jim Bianco kept insisting that he believes it is worse now, compared to the situation of the US back in 2012.