May 29, 2019, | AtoZ Markets – A well-known European regulatory watchdog – European Securities and Markets Authority (ESMA) has revised its proposal to the share trading obligation (STO) after many market participants shares their concerns for the UK stocks that would be traded on European venues.

As per 19th March report, ESMA has revised its proposal for the STO regime which stated that 14 of the UK’s biggest stocks would have to trade on venues inside the EU, which included Vodafone, Coca-Cola, BP, Rio Tinto, and GlaxoSmithKline, should the UK leave the European Union in a no-deal scenario.

For EU companies this could also be bad news. Even if a company is based in the EU, most of the liquid market for share trading could be in the UK. Therefore, the new rule will be preventing EU investment companies from accessing UK markets. It will directly become an obstacle for them to trade in EU companies.

In a statement, which was released on 29 March, ESMA confirmed that it would not be applying the STO restrictions to the 14 GB ISINs included in its previous guidance that: “to mitigate potentially adverse effects of the application of the STO, within the constraints of the extraordinary circumstances of a no-deal Brexit”.

The UK’s FCA was quick to express their concern over ESMA’s March announcement, which would result in European banks and investment firms will not be able to trade the listed UK shares. 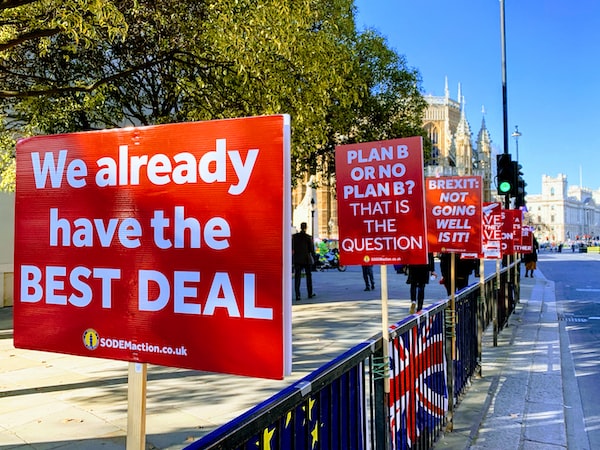 The European regulator acknowledged that “concerns expressed by some stakeholders about the guidance” in its revised proposal.

According to ESMA’s statement: “After careful consideration, and in coordination with the European Commission, ESMA has concluded that an approach to the STO based only on the ISIN of the share would be more likely to minimize any such risk of disruption in the interest of orderly markets. As a consequence, the EU27 STO would not be applied to the 14 GB ISINs included in its previous guidance.”

In response to ESMA’s announcement, the FCA was encouraged by the revised proposal and the steps are taken to ensure access to liquidity is maintained for UK-based shares. However, the regulator warned that the STO regime will still cause problems for investors. Also, it would lead to market liquidity and fragmentation across the UK and the EU.

As per the statement issued by the FCA, issued on 29 March, stated that:

“A number of shares with EU-27 ISINs have both a listing, as well as their main or only significant center of market liquidity, on UK markets. In our view, the ISIN that a share carries does not and should not determine the scope of the STO. Some shares have their main or only center of market liquidity outside the country in which the issuer is incorporated. This approach would place restrictions on a company’s access to investors and freedom to choose where they seek a listing on a public stock market.”

ESMA said that it remains mindful of the impact a ‘no-deal’ Brexit which would cause across the European financial markets and said that revisions of its approach up to 12-months after the date of full Brexit.

Also, ESMA stated that: “There is still a high level of uncertainty as to the final timing and conditions of Brexit. Should these change or should there be developments on the application of the STO in the UK, ESMA will assess whether its approach needs to be adjusted and will inform the public accordingly.”