July 24, 2019, | AtoZ Markets - One of the non-governmental financial firms of independent financial advisors has alerted the UK financial watchdog about fake FCA-signed bitcoin promotion emails that scammer sends on behalf of the British authority to potential investors.

Dominic Thomas, the founder of the London-based independent financial advisory firm has alerted the British authority about fake FCA-signed bitcoin promotion emails via his Tweet.

In his message, Thomas stated that he has already received several bitcoin promotion emails in the span of a few days. The Tweet reads: 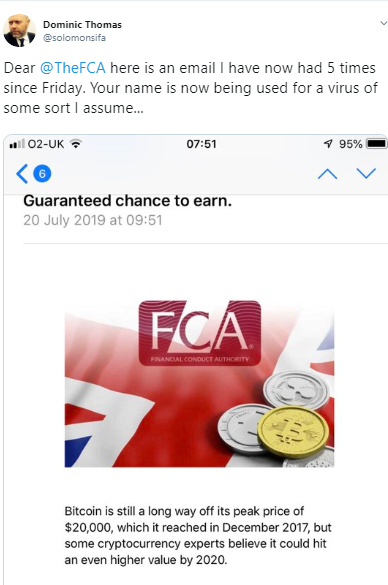 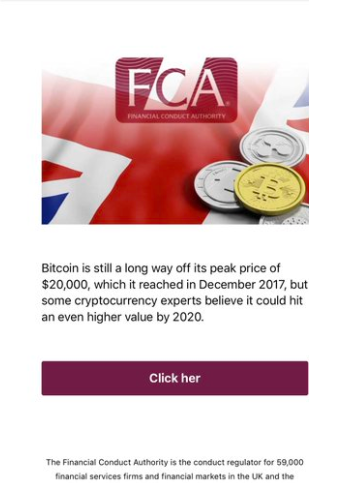 As per reports, the emails have the stamp of authenticity, including the Bank of England Prudential Regulation Authority logo.

The British Financial Conduct Authority in its turn has alerted investors to other fake emails entitled as ‘FCA business update’, ‘Blacklisted FX firms’ and ‘Overdue balance’ which appeared to be sent from [email protected] and [email protected]

FCA’s bits of advice about emails from scummers

The massive scam emails and legitimate organizations’ impersonators have been a thing for a long time. As per British authority, the criminals usually utilize special software to make their messages appear genuine.

Such emails usually contain the logo of FCA or any other national regulator, including images associated with the regulatory website or publications. It is worth paying attention to the grammar, which is usually bad.

The recipients are often encouraged to click on a link that appears to take them to the authority's website. Instead, they are transferred to a false website that tries to steal sensitive information from those targeted, which can be used later without their knowledge to commit fraud.

Although the FCA did not comment directly on the new email scam, it provided some general advice via its website.

The authority reminds, that fraudsters may contact their victims not only through email but through post letters and phone, as well. Such criminals usually start their talk by claiming to be from the Financial Conduct Authority (FCA).

The fraudsters may even be using the name of FCA employees to make them seem genuine. The scammers usually ask recipients for their sensitive personal information, including bank account details or internet banking passwords, what the real authority would never do.

The best advice in such case would be to delete the scam emails without opening them and not open any attachments in it.

In its latest report, the UK FCA revealed a significant increase in the number of queries regarding cryptocurrencies, the majority of which relate to scams.

The British authority has already proposed banning retail consumer crypto derivatives, including CFDs, futures, and options, as part of the UK authorities’ sweeping push to regulate the virtual asset class.