After Litecoin creator Charlie Lee has sold and donated all his Litecoins back in December of the last year, there is no possibility new LTC donations on his behalf would take place. However, industry insiders spotted a number of fake Charlie Lee Twitter accounts involved in LTC donation scam.

31 January, AtoZForex – If you have been seeing multiple posts from Charlie Lee's account on Twitter this week, you might have seen one of the numerous imposters’ messages about a giveaway. It appears that a number of imposters have been posing as the creator of Litecoin, Charlie Lee. They have been promoting a fake LTC giveaway.

The majority of the Lee imposters have been using Twitter accounts with names that closely resemble the real Charlie Lee’s account - @SatoshiLite. Some of the identified fake Charlie Lee accounts include @SatoshiLitez and @SatoshiLitee_. Their profile pictures are identical to this of the real account.

Scammers have been proposing a giveaway of LTC, ranging from 50 to 500 LTC. 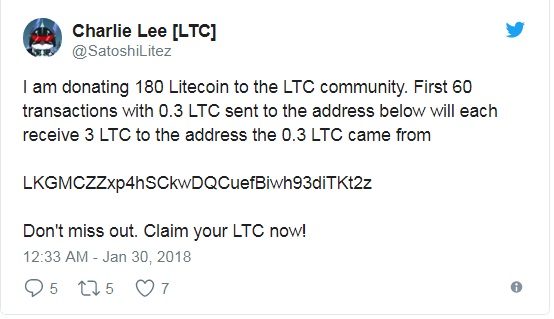 According to the industry insiders, there are also different scammers with somewhat similar giveaway posts. These include @LiteSatoshi, whose Twitter account information states that he is Roger Ver, and @kevinco68774468, whose page matches Lee’s in part, yet, whose name is “your mom.”

The real Charlie Lee has reacted to numerous posts from the scammers after he found out about the series of free LTC giveaways. He has also tweeted a warning about the fraudsters. He has mentioned that the imposters were blocking him so that he cannot see any new scam posts. 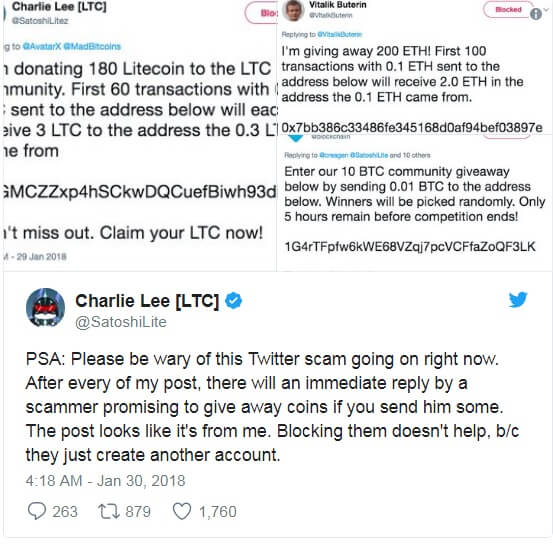 In fact, it might appear that scammers are taking advantage of Charlie Lee’s December 2017 announcement. Back then, he has sold and donated all of his LTC. It might be the case that scammers believed that Lee’s previous donation could make their efforts seem like a genuine post.

However, since Mr. Lee is no longer holding LTC, any LTC giveaway appearing on behalf of Lee is most likely a scam.