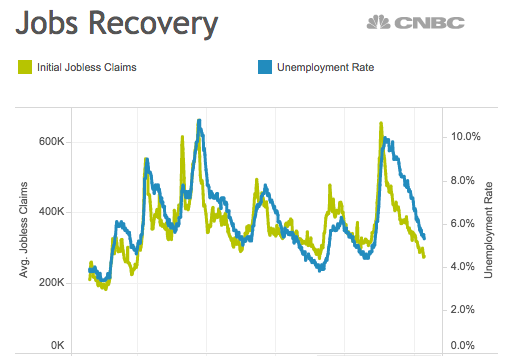 23 July, AtoZForex.com, Lagos – Following the impressive 4 decade low in unemployment claims released yesterday, investors and traders alike are upbeat about this data in a search for any clues to support the notion of a September rate hike by the Fed.

Although the Department of Labor said there were “no special factors” attributable to the number for coming at its lowest level since Nov. 24, 1973, some Wall Street veterans have disputed this notion, arguing that a number of factors converged to provide such an unusually low reading. Accordingly, it is opined that jobless claims falling to 255,000 is more likely attributable to seasonal factors, rather than a state of magnificence in the employment sector.

Peter Boockvar, chief market analyst at The Lindsey Group, said in a note- “In July auto companies typically shut down facilities as they do some maintenance, and seasonal adjustments usually take this into account,” “But if there is any shift by the auto companies in what they do, it can mess around with the seasonals. Thus, I don’t want to read too much into the data.”

Stephen Stanley, chief economist of Amherst Pierpont Securities, said in a note: “When the dust clears in another week or two, look for the running rate to remain in that (275,000) vicinity that has prevailed much of the year,”  He added that the latest number “makes for a great headline, but the latest move is not worth getting very excited over.”

Accordimg to CNBC, other factors to consider include the fact that a few other things to keep in mind: The four-week moving average, used to smooth out volatility in the numbers, is still at 278,500, down 4,000 from the previous week but still in the same ballpark. There’s little reason, then, to think that the closely watched nonfarm payrolls data is poised for a breakout of its 250,000 monthly trend that it’s found over the past year.

Investors are seeking for reasons to support their bias for a likely September rate hike. A one-week plunge in claims is unlikely to change the market’s expectations, as measured in futures trading on the CBOE, for a December hike.