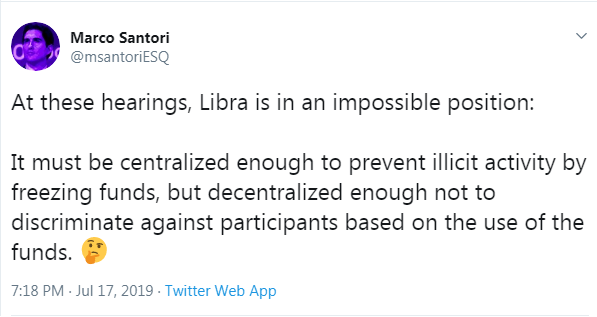 In his official letter, addressed to the entire crypto community, the Facebook Blockchain division lead and head of the Libra, David Marcus underlined, that the main project’s goal is to enable people around the world — especially the unbanked and underbanked — to take part in the financial ecosystem.

According to the latest report from the Global Findex, a portal which provides data on how adults save, borrow and make payments, there are about 2 billion “unbanked” adults from developing countries of the world. These are the people whom Libra supposedly wants to serve.

The majority of this population group has low education, poor creditworthiness, and unreliable state identity documents.

As a result, these people can not qualify for accounts in local banks (because such financial institutions have to comply with strict international “know your customer” procedures, to remain in the global market of financial services). Thus, for a very large number of adults in the world, identity is a real obstacle to trade.

However, billionaires, hedge funds’ managers, and brokerage firms that trade on their behalf are also inclined to hide their identities. None of them want their identities to be revealed when they place an order to buy or sell stocks, bonds, or goods. Such precautions are made to avoid market trade against them.

Does privacy help to maintain the interchangeability of funds?

According to experts, identity limits the interchangeability of funds and money is most useful if their past is unknown. A dollar or bitcoin that has become the subject of a legal or enforcement requirement due to its participation in a previous transaction is likely to lose its usefulness.

This ends in the exhaustion of monetary interchangeability. If we want to bring digital commerce without borders to the widest possible user base and expand the global economy, we must strive for confidentiality.

The most popular cryptocurrency, Bitcoin, failed to achieve sufficient privacy due to its ledger, being public. This led to the creation of cryptocurrencies with more robust privacy protections such as Zcash and Monero, along with the invention of potential sidechain solutions for obscuring transaction trails such as Mimblewimble.

Notable, that at the same time global regulators, including the US SEC and FATF, are expanding their purview over digital assets and demanding increasingly more user-identifying information, cryptocurrency developers are driving in the opposite direction: toward more privacy, more self-custody, more trustless exchange solutions, more user autonomy.

The experts assume, that it is impossible to assure users of privacy if the platform is not built on top of a fully decentralized, permissionless system.

In the case of Facebook Libra, the nodes maintaining the ledger are identified as belonging to a particular list of authorized validators – the Libra Association’s 28 members.

Thus, authorities can, demand the identity of users to meet anti-money laundering or counter-terrorism objectives, or, like digital surveillance in China, to assert control over the population.

On the bright side, according to Forbes’, there is “substantial” public interest in Facebook’s potential bitcoin rival. Despite a lack of trust in the company, people are already more familiar with the new Facebook project than ethereum, litecoin and Ripple’s XRP.

A new survey carried out by U.S. brokerage eToro has shown that while 58% of the U.S. adults have heard of bitcoin, Facebook Libra coin is already known by 16% of people—just a month after its whitepaper was published.

Ethereum, the second-largest cryptocurrency, has achieved 12% recognition since it went live in July 2015. 54% of respondents, expressed doubts over Facebook’s management of their personal data but only 17% indicated they would be willing to trust Facebook with their money the same way they trust their banks.

Tags Android phones Bitcoin Facebook FATF
Forex Crypto
Top 5 Forex Brokers
Top 5 Crypto Exchanges
Your subscription could not be saved. Please try again.
Thank you for subscribing. You will be the first to receive all the latest news, updates, and exclusive advice from the AtoZ Markets experts.
Everyone is reading
Is Forex Trading Halal or Haram in Islam?
Top 5 Forex MT5 Indicators for 2021 you should try
Top 5 cryptocurrencies 2021 | Best Cryptocurrency To Invest
close ×