Get VIP Trading Signals Market Watch
Trade Now Your capital is at risk.
The social media giant Facebook has finally released the whitepaper of its highly-anticipated Facebook Libra Coin project, which is believed to have a huge impact on the blockchain and crypto industry.

June 18, 2019, | AtoZ Markets - Multiple media outlets this year announced that Facebook is preparing to launch its own cryptocurrency dubbed as "Facebook coin" in the first half of 2019. The reports added that the digital currency will be pegged against the USD and will, therefore, be made as 'stablecoin'.

Later, the name of the Facebook coin changed to "Global Coin". Now the upcoming Facebook coin known as "Libra Coin".  Besides, the media announced that social media giant plans to create physical portals for users to purchase Facebook Global Coin. In May 2019, the social media giant founded LibraNetworks, which would focus on the blockchain, payments, data analytics, and investing.

According to the latest reports, Facebook Global Coin has attracted three major payments companies as backers, like Mastercard, VISA and PayPal, including Uber, Coinbase, and Andreessen Horowitz & Union Square Ventures. As the anonymous sources reported, each will invest approximately $10 million into a foundation that will govern the coin.

Libra Coin Whitepaper in a Brief

According to the recently released Facebook's document, the new project will operate on the company's in-house blockchain network dubbed as "Libra blockchain."

Facebook Global Coin will reportedly back by a basket of real assets - bank deposits and short-term government securities.

Besides, the new stablecoin will supplement by a vast network of digital exchanges that would help users buy and sell Facebook Libra Coin for fiat.

The whitepaper highlights that the Global Coin is not pegged to a single currency. This means that one Facebook Libra Coin will not always convert into the same amount of a given local currency.  As the document reads :

"Rather, as the value of the underlying assets moves, the value of one Libra in any local currency may fluctuate."

Thus, to ensure that price oscillation of Libra is not too rough. The team at Facebook has chosen assets that would minimize price volatility. The Facebook coin white paper details further:

"The assets in the Libra Reserve will hold by a geographically distributed network of custodians with investment-grade credit rating to provide both security and decentralization of the assets."

The social media giant expressed its beliefs. Libra by acting as a global currency and a reliable financial infrastructure, might become a solution for unbanked regions.

According to the reports, the Facebook Libra Coin will accept on Whatsapp, Instagram, Spotify, and other apps.

As per the whitepaper, Libra blockchain and Facebook Libra coin will be governed by an independent and not-for-profit organization - Libra Association.

The organization headquartered in Geneva, Switzerland. Libra project investors Visa, Mastercard, Uber, and Paypal are among the confirmed members of the new association.

The social media giant reportedly is aiming to onboard around 100 members for the Libra Association by the target launch in the first half of 2020 and is considering launching its crypto first in India.

According to the whitepaper, one of the major goals of the Libra Association is to move toward complete decentralization. The document also states:

"This decentralization ensures that there are low barriers to entry for both building on and using the network. It improves the Libra ecosystem's resilience over the long term."

Crypto Community Reaction to the Whitepaper

Facebook Libra Coin whitepaper release caused mixed reactions of the social media users and the crypto community. For example, Andreas Antonopolous, an author of Mastering Bitcoin, expressed his skepticism. However, it was about the supposed open-source nature of the "Libra blockchain".

Antonopolous believes that Facebook's Libra will compete against retail banks and central banks. But not against any open, public, permissionless, borderless, neutral, censorship-resistant blockchains, like Bitcoin.

Binance' CEO Changpeng Zhao in his turn,  in his tweet, mentioned Libra's pros and cons with regard to the privacy of users. 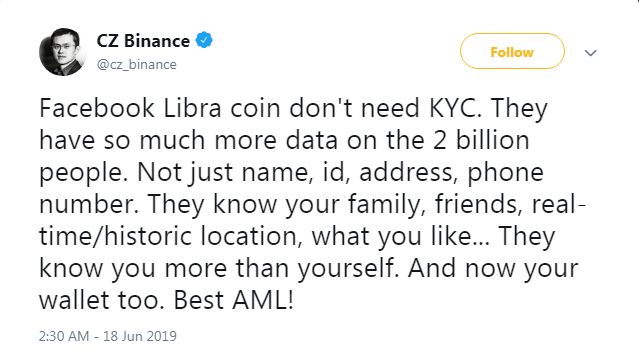