Mr. Evan Tzivanakis is no stranger to the FX industry, as he caters a wealth of experience. He started off initially as a Sales Account Manager at FXGM (FX Global Markets) back in April 2009. After joining IronFX Mr.Tzivanakis advanced as high as the Deputy Head of Global Sales. Being active at IronFX for almost four years, he was one of the main catalysts in developing the broker’s presence in SE Asia and Australia by pioneering the setup of their offices, recruiting and training their sales, conducting various seminars and developing new partnerships. 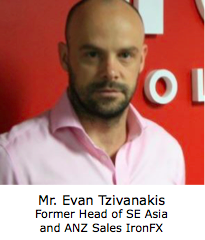 AtoZForex's Quyen Nong had an opportunity to have a personal discussion with Mr. Evan Tzivanakis for further clarification on the matter and in response IronFX’s former Head of SE Asia & ANZ Sales commented as follow: "'This is a natural next step that springboards from my most recent role. During my years at IronFX, I learned a tremendous amount and I have contributed the most. In making the decision recently to take a new leadership role, I evaluated my options and recognized my strong desire to continuing developing myself, as I positively impact others. I now have the opportunity, aspiration and motivation to apply the knowledge I have gained, for a large brokerage that has leadership prepared to do what it takes to become the real premier brand name in the industry."

This recent development adds on to large pile of recent developments from IronFX, which commenced at the start of this operative year after the announcement of the firm’s talents refreshments earlier this year. Since then, various prominent figures have separated their ways with the global leader in online trading and found their way at other reputable industry leading institutions globally. One of such which AtoZForex covered recently was the case of Mr. Yagub Rahimov, the face of IronFX Academy and the Global Business Development manager, who also left the company to join 7marketz Inc , a rapidly growing marketing and media consulting firm for new leadership role. Earlier in May Hotforex hired IronFX Sales Manager Nick Jay, while Middle East team leader Amr Almassry  joined FXPrimus.