April 11, 2019, | SQUARED DIRECT – The Euro had a volatile day but ended the session by edging higher against the Dollar. The Single Currency fell in the early hours after Draghi reiterated that the risk remains to the downside, the economic slowdown will likely continue and that rates will remain low throughout this year, or as long as needed. That statement took the EUR to print new daily low 1.1230, but the fall was short-lived, as the US inflation data fell short to market’s expectations boosting the common currency.

The US Dollar came under selling pressure after FOMC Meeting’s Minutes showed that policymakers confirmed the ‘the patient’ stance recently adopted, while the majority of Fed’s members saw rates on hold throughout this year. The sentiment is still mixed between these two currencies, as both Central Banks are adopting a dovish monetary policy, leaving traders confused in the middle.

Today, the macroeconomic calendar will include German March inflation, where a softer reading will put pressure on the Euro. Also, the US will publish March PPI figures, weekly unemployment claims, and a couple of Fed’s speakers.

The Euro is attempting to break above 1.1280 (R1) if successful then the next target for the bulls will be 1.3 (R2) where the 200-day moving average (yellow line) could also act as a resistance. A break above 1.13(R2) could ease the negative sentiment on the single currency in the short-term and will open doors for a 1.1330 (R3) possible retest. The bears need to break below 1.1250 (S1) to regain control. 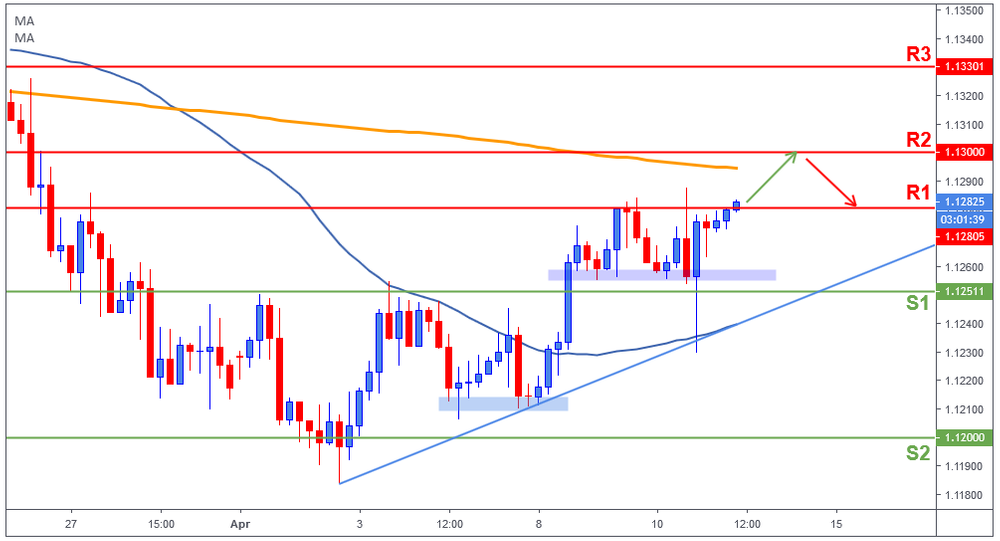 EUR/USD, GBP/USD, BRN/USD and BTC/USD 18 June Live Entry Points
Forex Crypto
Top 5 Forex Brokers
Top 5 Crypto Exchanges
Your subscription could not be saved. Please try again.
Thank you for subscribing. You will be the first to receive all the latest news, updates, and exclusive advice from the AtoZ Markets experts.
Everyone is reading
Can Ripple Break Below $0.55 Significant Event Level?
Ethereum Facing Support Around $2,300 Price Area - Will Strike Upward?
Ethereum Remains Below $2,100 Resistance Area - What Next?
close ×