The market will be closely watching tonight’s FOMC minutes release. Is Euro at the start of a 20% upside move? Gain insights from this exclusive EURUSD outlook.

17 August, Orbex – Contrary to the solid labour market reports out of the US over the last two months, indicators such as growth and inflation remain weak and pose a significant challenged to USD hawks, especially when considered alongside the upcoming US elections. The lack of positive data catalysts was compounded this week when Fed’s Williams, a traditional hawk, aired his views that the US should adopt an alternative policy approach such as a higher inflation target and/or nominal GDP targeting, moves which would translate into a weaker USD if adopted.

This weakened USD environment has created a resilient tone in risk assets, but the Euro has also found room to appreciate against the green-back, thriving in an environment bereft of the bearish signals that, a few months earlier, investors had expected would emerge such as clear monetary policy divergence and heightened political risk in Europe.

Many investors were expecting the ECB to sound decidedly Dovish at their July rates meeting, noting the downside risks from Brexit and the likelihood of needing to ease further in the coming months. However, the ECB noted that the impact from Brexit had been less than was expected and Draghi even warned investors to be cautious regarding the initial Brexit impact estimates. Moreover, only a very fleeting reference was made to the possibility of more easing with the ECB reiterating their famous line of having both the willingness and readiness to act if warranted. The meeting was a stark disappointment to Doves and essentially has kept EUR afloat over the summer.

In support of these comments by the ECB, recent EuroZone data has continued to show positive signs with EZ 2Q GDP was above expectations at 1.6% YoY vs 1.5% with the QoQ figure inline at 0.3% whilst EuroZone CPI in July was above expectations at 0.9% vs 0.8% YoY on core and 0.2% vs 0.1% YoY on headline. These figures indicate that both inflation and growth in the EuroZone remain buoyant, and growth is actually higher than the US and indeed trending higher, whereas US growth is trending lower. The last time that EuroZone growth was higher than in the US the US Dollar fell over 25%.

The vast fall in EURUSD over 2014 occurred during a period of heightened economic divergence between the US and the EuroZone, but this currently is not the case with Manufacturing PMI broadly similar.

US Rate Hike Risk Not Straight-Forward

The case for a lower EURUSD rate is tied mainly to the prospect of US rate hikes over the remainder of the year, however, with leading US indicators still highlighting weakness and election uncertainty prevailing, it seems unlikely that the Fed would look to move before December, which is currently priced around 50%. The risks extended both ways here but even in the event of a rate hike occurring this year, the USD is unlikely to find sustained support unless there is an accompanying widening in growth differentials which for now appears unlikely and so should the Fed move, we could expect EURUSD to react in a similar fashion to last year where it actually rose in the wake of the hike.

Indeed, the Euro’s reaction to recent US positive US data surprises highlights a dwindling sensitivity to US inputs in the current climate with the strong June and July NFP reports triggering only minor moves in EURUSD when compared against the typical reactions seen last year.

Secondly the fact remains that even though recent US labour market indicators have surprised to the upside, H1 growth was dismal at 1% with the trend in job growth remaining tilted to the downside.

Considering the weaker-then-expected effect of European political risk, it can actually be seen that Euro resilience has proved to be the norm in recent years with EUR remaining buoyant despite the Greek crisis last year and now weathering the Brexit storm this year. Perhaps markets feel a sense of safety around these events in the knowledge that the ECB stand willing to do whatever necessary to backstop the economy in the event of an emergency.

Looking at the institutional positioning in EURUSD highlights a clear trend to the upside starting from last year’s lows with the current phase potentially marking the start of a subsequent recovery that could take positioning above neutral for the first time since 2014. 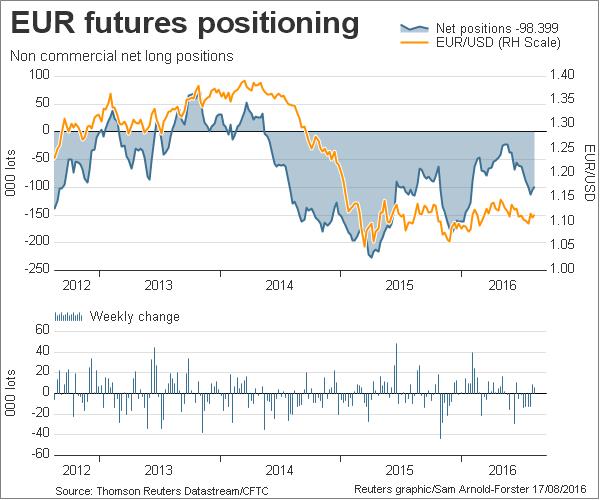 Looking ahead, tonight’s July FOMC minutes release will provide the next guidance on the US rate path with risks tilted to the Hawkish side given the Fed’s comment in their statement that they noted near term, economic risks as having diminished. However, in light of recent data, any Hawkish sentiments might lose some of their sting. The Jackson Hole event next week is a far bigger catalyst for EURUSD and given recent comments by Fed’s Williams, who has close ties to Yellen, there is a risk that the Fed Chair disappoints bulls.

This article was written by James Harte, Analyst at Orbex – An AtoZ Approved Forex Broker.