EURUSD still roots to the downside, consolidating around 1.13 ahead of today’s ECB meeting. What could happen next?

March 07, 2019 | AtoZ Markets -The European Central Bank will meet this week and the market does not expect the bank to tighten its monetary conditions. The Euro-zone economy has been flat this year making the most traded currency pair to lack the volatility it used to. The expected cautious and dovish tone from the ECB might have been priced in but the broader market sentiments still point to lower prices. The Fed Q3 2019 rate hike projections and the US-China trade deal might see the greenback continue its dominance in the first half of this year. Today’s Euro-zone data will have little effect on the short and medium-term EURUSD direction.

After dropping from 1.142 in about a week ago, EURUSD has continued downside. Price has been in a 1.13-1.15 range since Q4 2018. Below 1.13, we expected that a real downside move would happen below 1.1215 low. Price dropped below 1.13 on Wednesday for the first time in a week. Today, however, a slight retracement back to 1.13 neighborhood is still weighing on the bears and giving the bulls the hope of a resurgence. From a technical point, it seems EURUSD will continue downside to test 1.1235 before a bigger bullish correction.

The dip from 1.142 is looking like an impulse wave. The drop should continue to 1.1235 before a much bigger correction could happen. In the last update where we used the chart below, the state of the bearish impulse wave was not clear after price bounced from 1.1315 intraday support level. 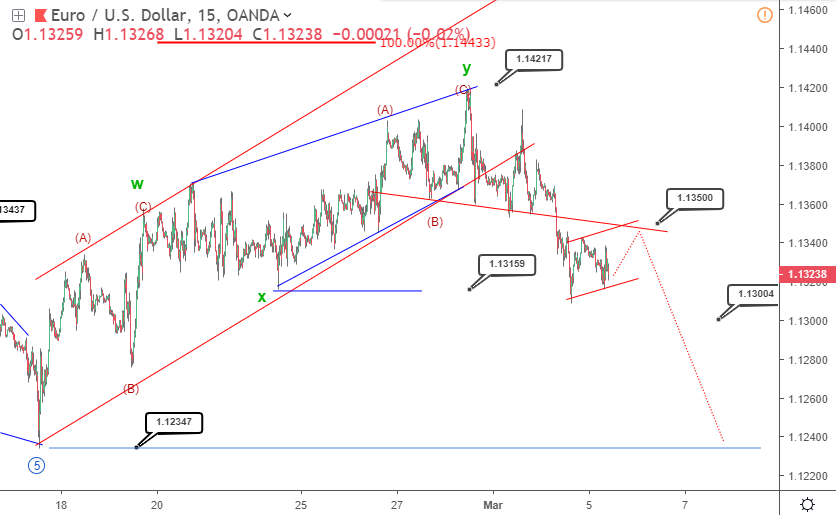 The bounce was limited below 1.135 before dropping further to 1.1285. An impulse wave is clearly emerging as the chart below shows. 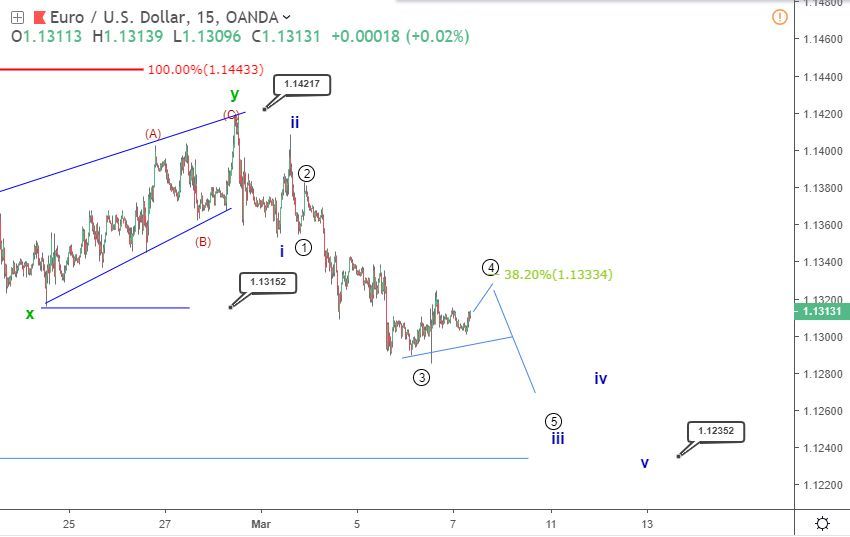 The 3rd sub-wave of the impulse wave from 1.142 is emerging. The 4th minor wave might correct higher to 1.1315-1.1335 before the price drops further to the 1.1235-1.1215 support zone. Unless a fast break above 1.145 happens, the near-term market sentiment is still bearish. Alternatively, the current rally might be wave iv instead of wave 4 of iii but all the same, the bears still rule for now. After today’s ECB, there might be enough volatility for the price to decide where it heads next.