EURUSD is consolidating the bullish correction it started mid-february to 1.14. Ahead of today’s Fed chair Powell speech, the following give insights based on Elliott wave theory.

The Fed’s desire to keep rates unhiked has weighed on the Dollar this year. In his recent speeches, the Chair of the Fed has reiterated this decision and might do that again today when he testifies at Washington. The Euro on the other hand is just recovering on the bearish pressure from recent economic data emanating from the Eurozone. EURUSD has once again stayed between 1.13 and 1.15 after dropping to 1.1235 on 15th February. The rally is looking corrective, has continued and now few pips from 1.14 ahead of another probable meeting with 1.15. Will the bearish trend continue after the current correction?

The long term outlook for EURUSD still points downside as price rallies within the bearish zone. From Elliott wave perspective, the current rally is a correction of the 1.1515 to 1.1235 drop which happened in the first half of this month. If this run from 1.1235 ends up corrective, a new bearish wave would be seen and price would eventually break below the 1.1215 2018 low.

In the last update of our daily EURUSD Elliott wave analysis, we looked at the current rally from 1.1235 and suspected a double zigzag bullish correction to 1.14 and its neighborhood is high on the cards. The 61.8% Fib retracement of the bearish impulse wave from 1.1515 to 1.1235 was marked at 1.1405. The chart below was used. 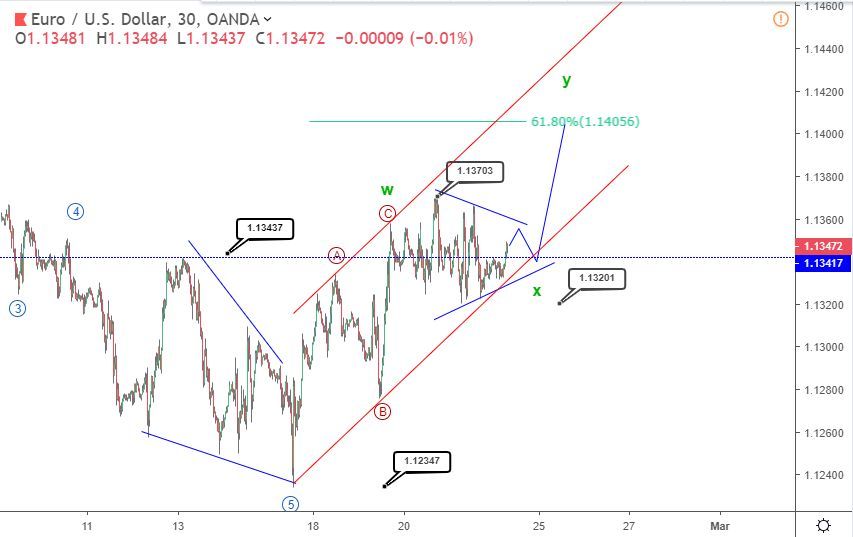 A double zigzag with a triangle wave x was emerging. Price eventually completed the sideway correction and continued upside on Tuesday. Currently the run is around 1.14.

When will the bears return?

The chart below shows what could happen next based on Elliott wave theory. 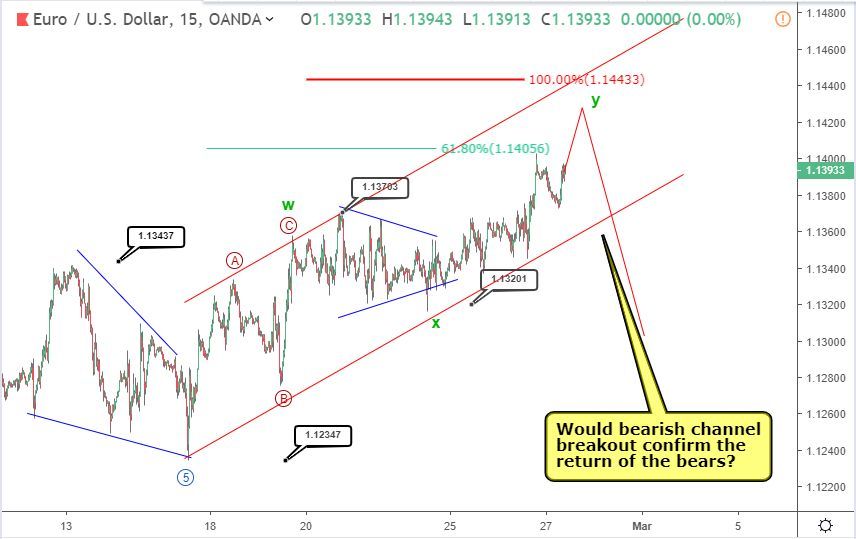 The double zigzag is on wave y which should be the last leg. The extent of the last leg is not very certain but using technical tools,we can design possible reversal zones. The Fibonacci extension of wave w from x is 100% at 1.1443. This means that 1.14-1.1443 is our reversal zone. Price will be expected to reverse at any price in this zone and break below the double zigzag rising channel to confirm its commitment to the downside. A fast break above this zone to 1.15 would invalidate this forecast and see us have a new look in our next daily EURUSD Elliott wave analysis update.