EURUSD rallied shortly after Friday’s U.S employment data. Price is back at 1.12. Will there be further rallies this week? The following share insights based on Elliott wave theory.

May 06, 2019 | AtoZ Markets – The employment data from the U.S came far better than expected. At first, the dollar-denominated currency pairs dropped before returning upside as a result of the USD weakness across the board. Before the employment data, the last FOMC meeting assured investors of unchanged interest rates despite a better inflation rate in 2019. After the meeting, EURUSD, which has gained over 150 pips to hit 1.126 quickly tanked and continued to 1.113 till Friday before the employment data. Since Friday, EURUSD has returned upside to hit 1.12 and might continue further upside.

The US-China trade deal is back on the table. US President Trump threatens to sanction more tariffs on Chinese exports to the US from 10% to 25% before they even embarked on what is expected to be the last round of the trade talks. This might be another gimmick though he also tweeted that the deal is ongoing but ‘too slowly’ and China’s ”attempt to renegotiate” won’t be accepted. This mixed words will cause investors to drop the Dollar until there is more clarity. The Dollar weakness might continue. Furthermore, in the course of the week, inflation data will be released on Thursday and Friday after Powell’s speech at Washington.

EURUSD started this week with a 30 pips gap to the downside but has quickly covered it and now oscillates between 1.118 and 1.12. The price might break slightly below this range before it continues with a break above 1.12 high.

Price is still progressing as expected from our Elliott wave perspective. It completed a bearish impulse wave that lasted for over 14 months at 1.111 and then burst to the upside. A 3-wave bullish correction to 1.18 to 1.21 has been anticipated. In the last update, we labeled a minor bullish impulse wave breakout to 1.1265 and a 3-wave dip after the FOMC. The chart below was used. 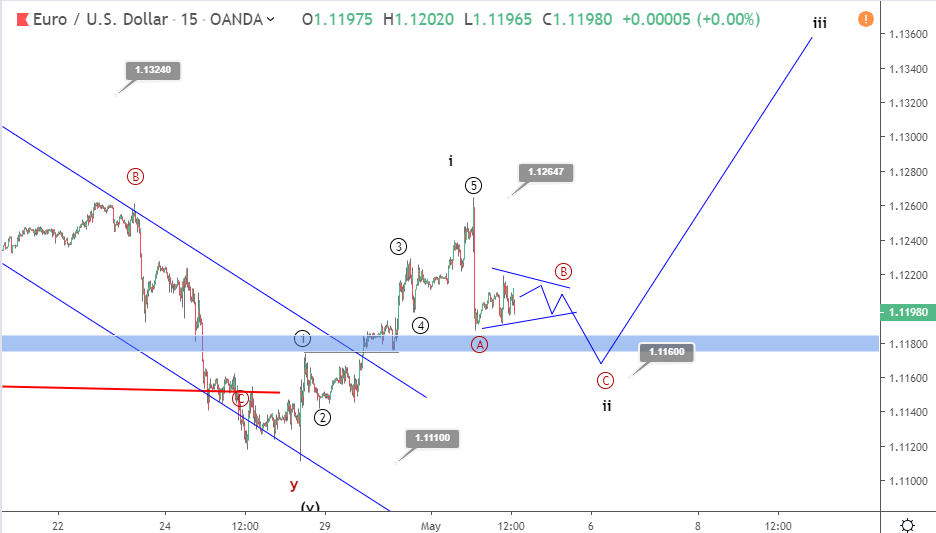 The corrective dip went deeper than expected but the forecast above was not violated because 1.111 low still holds. The rally that follows the dip to 1.113 is now expected to be much bigger than the 1.111-to-1.126 wave i rally as the chart below shows. 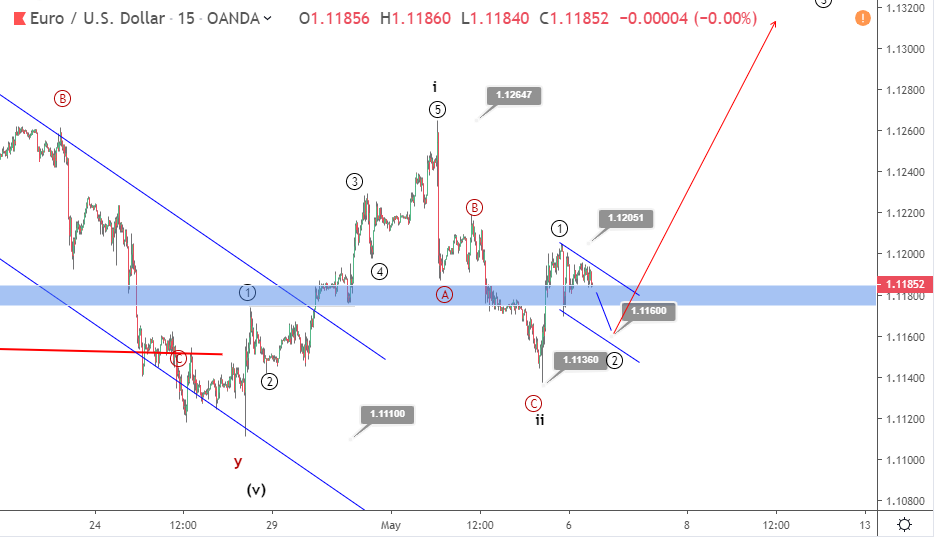 The chart above shows wave iii has commenced with its 1st sub-wave ending at 1.1205. The current dip (2nd sub-wave) might continue to 1.116. A break above 1.1205 will confirm the start of wave iii and is expected to lead to further rallies toward 1.15. Conversely, a break below 1.1136 will violate this wave forecast while a break below 1.111 will violated the bullish bias.