EURUSD has slumped below the 1.092 low to hits its 24 months low. The following technical analysis is based on the Elliott wave theory.

September 30, 2019 | AtoZ Markets – The Euro is falling against the Dollar again. Price has now dropped to the lowest since May 2017. There were minor bounces but the bearish trend was too overwhelming for any major recovery. The bulls just couldn’t breathe. In the last couple of weeks, 1.092 has held as a support after a quick bounce to 1.11. However, that was how high the bounce could go. Late last week, the bears pushed close to 1.092. This has continued this week and the price is now at a new multi-month low.

The Euro-zone is truly troubled. The many measures it used to stabilize the Euro has not been able to rescue the currency especially against the Dollar. Are there more cards to play? Meanwhile, Euro has gained significantly against AUD, NZD and GBP since August but has plummeted against CAD and especially USD. The buck has remained far ahead, above the reach of most currencies this year. EURUSD is much likely to drop deeper.

Resistance Levels: 1.11, 1.125 and 1.14. Price is drifting away from these levels. The pressure will be on the support levels

From the long term perspective we have been looking at for many weeks, the bearish run since January 2018 is completing an impulse wave with an ending diagonal 5th wave. In the last update, we looked at the most likely scenarios. Right now, the diagonal is invalid as the new chart below shows 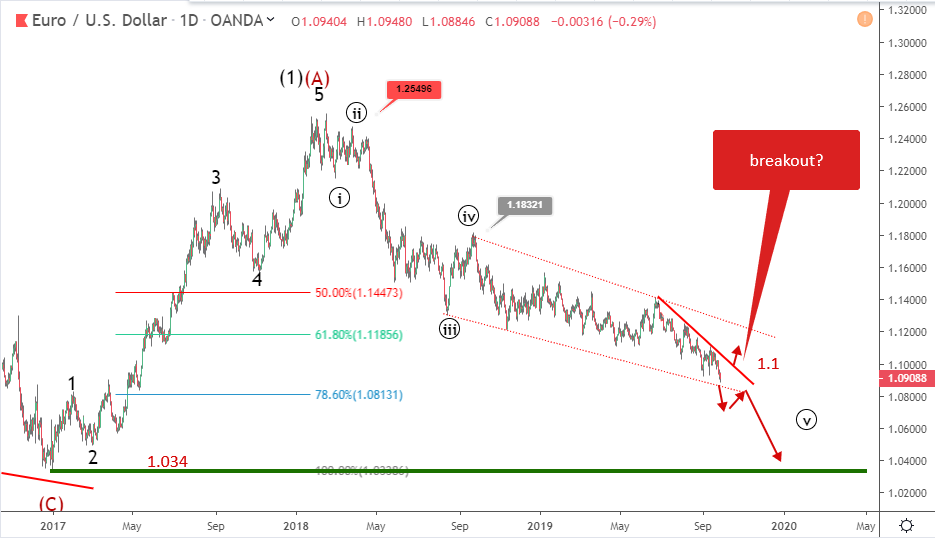 The 5th wave is getting complicated – not looking like either an impulse wave or an ending diagonal. However, if a massive breakout happens above the thick trendline up to 1.11, the bulls will have another chance to push toward a significant recovery. On the other hand, if the dip drops below the support trendline of the wedge, there might be a minor retest before the EURUSD price slumps further toward the 1.034 support level.

EURUSD Facing Support Around 1.1760 Event Area - Will Strike Higher?
Forex Crypto
Top 5 Forex Brokers
Top 5 Crypto Exchanges
Your subscription could not be saved. Please try again.
Thank you for subscribing. You will be the first to receive all the latest news, updates, and exclusive advice from the AtoZ Markets experts.
Everyone is reading
Is Forex Trading Illegal in India? Can Indians Trade Forex Legally?
XRP Skyrockets After Ripple’s ODL Announcement
Ripple Found Support Around $0.62 Price Area - Will Recover Upside?
close ×