EURUSD stays calm at 1.11 ahead of important events later in the week. The following technical analysis is based on the Elliott wave theory.

August 19, 2019 | AtoZ Markets – The currency market started this week a little unchanged from how last week ended. President Trump was upbeat about securing a trade deal with China though there are contradicting reports claiming this might not happen anytime soon. The economic calendar today is very light and the market is expected to stay calm for a large part. The Euro-zone continues to be under pressure and will most likely remain so until the Brexit deal is finalized. Jeremy Corbyn, the UK opposition leader will deliver a speech today. He wanted a soft Brexit – with a deal. The battle is set to drag on till the deadline.

The EURUSD couldn’t sustain a big surge to 1.125 and dropped quickly last week to 1.107 – its lowest in the last two weeks. Meanwhile, the price recovered slightly to 1.11 last week before it ended below it. At the opening of the market this week, EURUSD is playing around 1.11 again. It’s much closer to the 1.1025 support level than the 1.125 resistance level.

Price is close to the 1.1025 support level. A breach below it will most likely lead to the 1.1 handle or even lower. For the bullish correction to continue, the price will have to break above 1.115 intraday critical level and then 1.125 on its way to the 1.13 and 1.14 handles.

From the Elliott wave perspective, EURUSD completed a long term bearish impulse wave at 1.1025 with an ending diagonal pattern. A 3-wave bullish correction to 1.18-1.2 is expected to follow. The currency pair reacted with a push from 1.1025 to 1.125. However, this has not yet been sustained as the price plummets below 1.11. Despite this, we expected a surge to 1.13-1.14 in the last update if the current dip stays above 1.1025. The chart below was used. 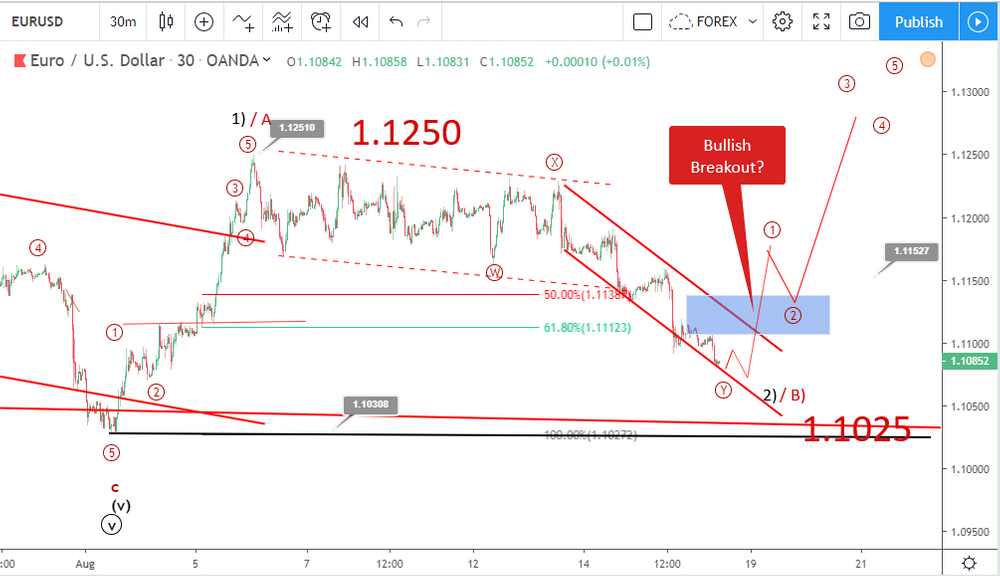 This scenario will have a chance of happening is the price surge above the blue zone to 1.115-1.12 territory to start wave 3) or C). The price is currently beneath this zone as the new chart below shows. 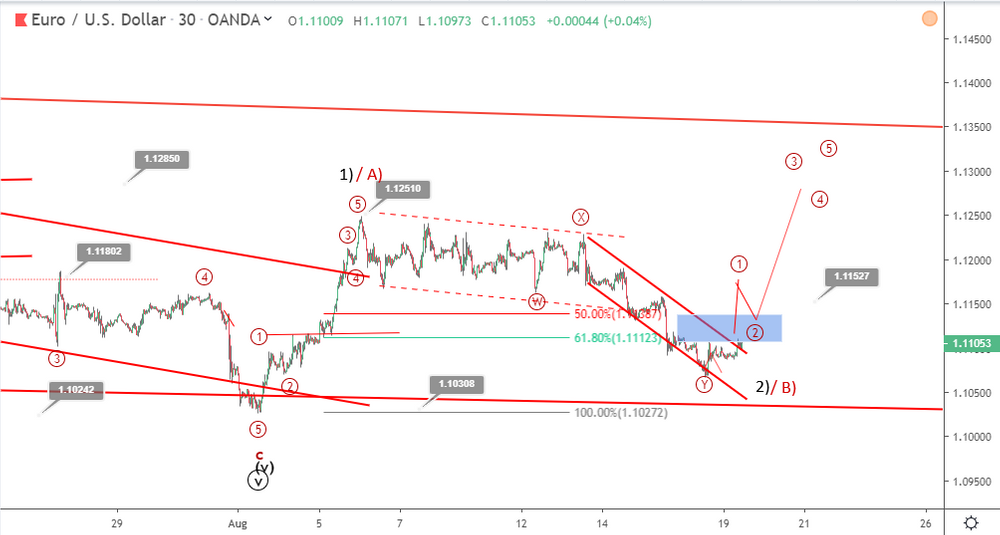 Can Facebook Inc. Hit an All Time High of $350 Price Area?

Dow Jones Volatility Increased Over $34,400 Price Area - Bulls To Regain Momentum?
Forex Crypto
Top 5 Forex Brokers
Top 5 Crypto Exchanges
Your subscription could not be saved. Please try again.
Thank you for subscribing. You will be the first to receive all the latest news, updates, and exclusive advice from the AtoZ Markets experts.
Everyone is reading
Ripple Lawyers Object SEC’s Request to Extend Discovery Deadline
SEC Lawsuit Against Ripple May Drag On Until 2022
Ethereum Sustains Below $2,500 Psychological Area - Bears to Push the Price Downside?
close ×