EURUSD returns upside after it quickly recovered from a quick slump. The following looks at what could happen next based on the Elliott wave theory.

September 16, 2019 | AtoZ Markets – EURUSD has dropped to 1.105 after it hit 1.11 last week. During the ECB meeting on Thursday, EURUSD quickly slumped to hit 1.092 support. However, it recovered almost immediately and hit a new high for the week at 1.1109. Ahead of the FOMC report later in the week and the current rumour of new US tariffs on the EU, the short term forecast looks bullish at the moment.

At the ECB meeting on Thursday, the bank made a 5-point policy decision. The interest rate on the deposit facility was decreased by 10 basis points to -0.5% while rates on the main refinancing operations and the marginal lending facility remained unchanged. Besides the rate decisions, the bank also launched new stimulus programmes to fight recession which included a restart of its quantitative easing programme in November just as the market expected. Meanwhile, the bank warned that the economic conditions have plummeted after it cut down its inflation and growth forecasts. However, the Euro has been lifted with the offer of a cheap loan expected to encourage banks and investors.

Meanwhile, President Trump, who has been asking the Fed to cut rates in its meeting later this week, has accused the ECB of weakening the Euro against the Dollar so as to hurt U.S exports and aid European companies to easily sell their goods overseas. There are now concerns that President Trump might hit back with a tariff hike on European goods. The US-China trade war is still on hold as investors await the next actions. This week is expected to be volatile as five central banks including the US Federal Reserve reveal their next monetary policy decisions.

EURUSD has completed a double bottom reversal pattern from 1.092 with neckline at 1.1085. From the long term perspective, as explained in the last update, a 3-wave bullish correction is expected toward 1.18-1.21 target zone. 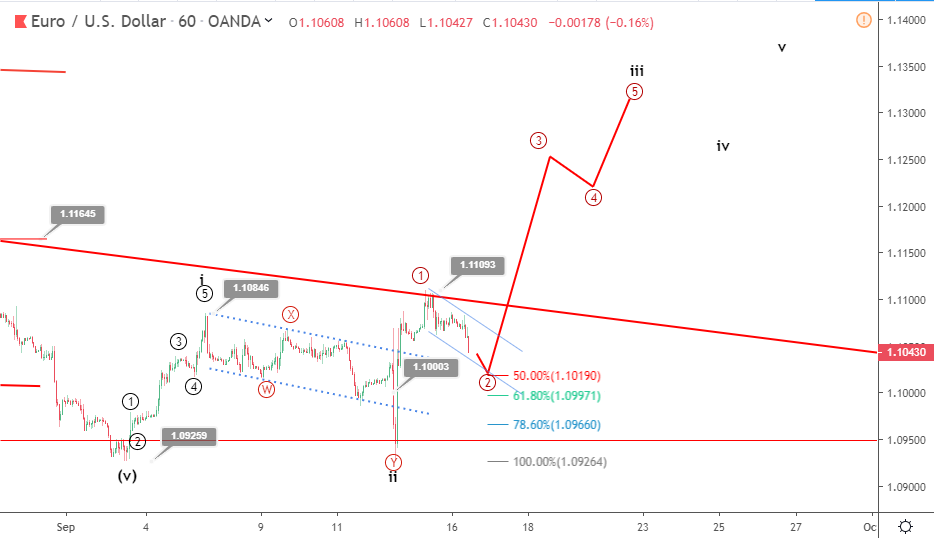 EURUSD price dropped off the long term trendline at 1.1109. It’s currently making a minor correction toward 1.102. New bullish opportunities could emerge toward 1.14 if the bulls continue to hold above 1.092 and then followed by a fast break above 1.1109.