EURUSD is trading a bit above 1.14 ahead of today's employment data from the US. The following give insights based on Elliott wave theory.

January 04, 2019 | AtoZ Markets - EURUSD has climbed above 1.14 amid growing concerns about the global economy. The market will look forward to last December jobs reports from the US before Fed chair, Powell, speaks above the US economy in less than 2 hours after. The NFP is expected to come at 179k (24k better than October's figure). Meanwhile, EURUSD has recovered more than 50% of the near 200 Pips drop that was seen on Wednesday. If the NFP comes better than expected, then EURUSD might continue the bearish run below 1.1215 to resume the bearish trend. Otherwise, further rallies to retest 1.15 could happen.

In the last update, we looked at two scenarios after price made a bit of recovery from 1.13. The first scenario expected the bullish correction from 1.1215 to have ended and price should continue downside after the current correction to 1.14. This scenario will play out especially if the NFP comes better than expected with a big deviation. The second scenario expected a higher correction up to 1.155-1.16. A worse than expected NFP data with a big deviation will probably see this through. The two scenario supports the long term bearish move to continue once the bullish correction from 1.1215 is confirmed to have ended. 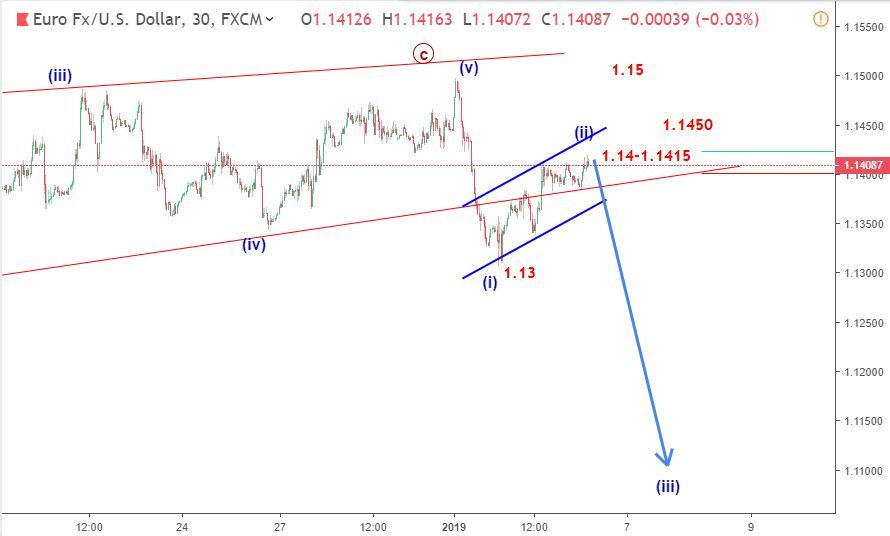 The scenario above is more preferred for now. The rally from 1.13 looks corrective and formed within a rising channel. The first bearish confirmation would be a break below the support line of the rising channel. A break below 1.13 will be expected afterwards. below 1.13, price might find its way to test 1.1215 support level before continuing downside. A better than expected NFP will fit this forecast well. Alternatively, if price breaks above the channel instead (probably as a result of a worse than expected NFP), a retest of 1.15 might happen and the second scenario in the last update will be preferred.