EURUSD recovered early on Monday after a better than expected German data. The following outlook is based on EURUSD Elliott wave analysis.

March 25, 2019. | AtoZ Markets – After dropping to 1.1275 last week, EURUSD has returned upside above 1.13 following an upbeat German data. EURUSD gained from last week Fed’s dovish comments. However, the spike to 1.145 was resisted to continue further as the price dropped 170 pips quickly to hit 1.1275. This week, the price is retracing above 1.13 after better German data. However, this might be shortlived as the gloomy period for the Euro-zone still persists amid uncertainties surrounding the Brexit and other concerns.

From the technical analysis perspective, EURUSD still has a bearish bias but will soon end. The currency is still under a strong selling force which might drag it further downside. In today’s update, we will analyse and make forecasts from a higher time frame and narrow it down to lower time frames. Based on this, there will be an adjustment to the short-term bias we looked at in the last update. 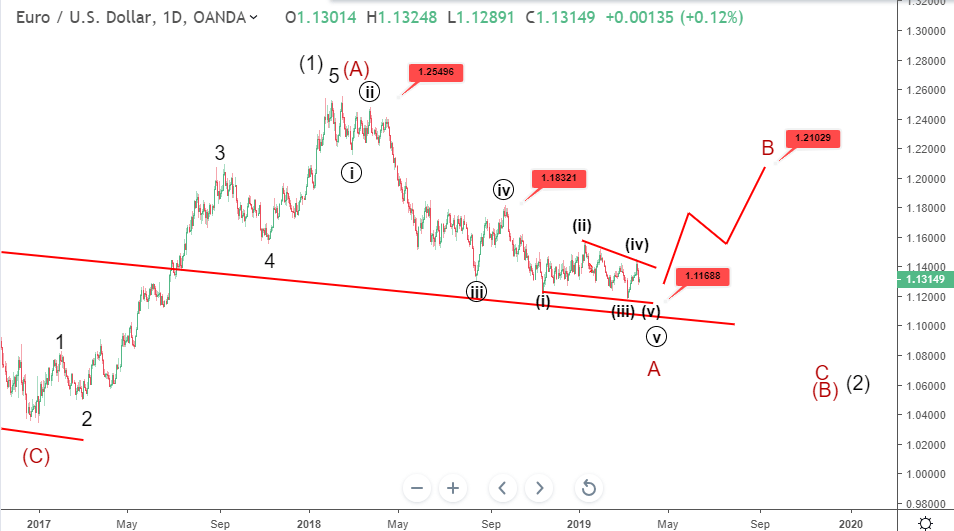 The price behavior from January 2017 shows an impulse wave rally to 1.255 in February 2018. According to Elliott wave theory, a 3-wave correction in the opposite direction should happen after price completes a 5-wave move in a certain direction. Since the 2018 peak at 1.255, EURUSD has dropped. The bearish run was seen throughout 2018 when it hit a 1.1215 bottom. The bottom has been taken this year with a new low at 1.1175.

What is interesting to note here is how price has emerged into a bearish impulse wave from 1.1255. This suggests that a big bullish corrective push is very close as the run from 1.1255 comes to an end. The 5th wave is developing into an ending diagonal which we know as a very effective price reversal pattern. This pattern, also known as a ‘wedge pattern’ is very popular among technical traders and analysts. Can we say EURUSD is close to making probably its biggest bullish run since January 2018? This is not 100% certain but the possibility should not be ignored. Here is a better look at the 5th wave ending diagonal as it completes its last leg. Tags Elliott wave analysis Elliott wave Forecast EURUSD technical analysis
Forex Crypto
Top 5 Forex Brokers
Top 5 Crypto Exchanges
Your subscription could not be saved. Please try again.
Thank you for subscribing. You will be the first to receive all the latest news, updates, and exclusive advice from the AtoZ Markets experts.
Everyone is reading
Is Forex Trading Halal or Haram in Islam?
Top 5 cryptocurrencies 2021 | Best Cryptocurrency To Invest
How to Setup Monero Mining in 2021?
close ×