EURUSD recovers above 1.10 on Wednesday to stage a recovery. The following looks at what could happen next based on the Elliott wave theory.

September 04, 2019 | AtoZ Markets – Euro rallied across the board on Wednesday following Lagarde’s positive speech. EURUSD which made a new multi-month low at 1.0925, closed bullish on Tuesday around 1.0975. The recovery continued on Wednesday and has now broken significantly above the 1.1 handle. If this is maintained till Friday and the US Non-Farm Payroll came bad for the USD, EURUSD could quickly mount above 1.11.

The Euro has struggled under the ongoing political environment with the US-China trade war and the Brexit mounting pressure. EURUSD has therefore hit its lowest price since April 2017. Meanwhile, the incoming European Central Bank head Christine Lagarde who presently heads the IMF defended the Bank’s policies. During hearings in the European Parliament on Wednesday in Frankfurt, she said that the bank is taking the necessary steps and stood a similar position with the bank that it would need monetary support for an extended period of time. The position of the Brexit at the end of October would most probably add to the long term trajectory of the EURUSD.

On the other hand, Dollar dropped against the major currency today as the trade war continues to cause panic. With no solution in sight, the Dollar might start a real dip into the last quarter of the year. The market will look forward to the NFP data on Friday for more short-term clues.

The long term Elliott wave analysis expects a bullish correction to 1.18-1.2. The Eurusd bearish impulse wave that started in January 2018 completed with an ending diagonal pattern. The 5th wave ending diagonal as we discussed in the last update was expected to hold the price above 1.095 as the chart below shows. 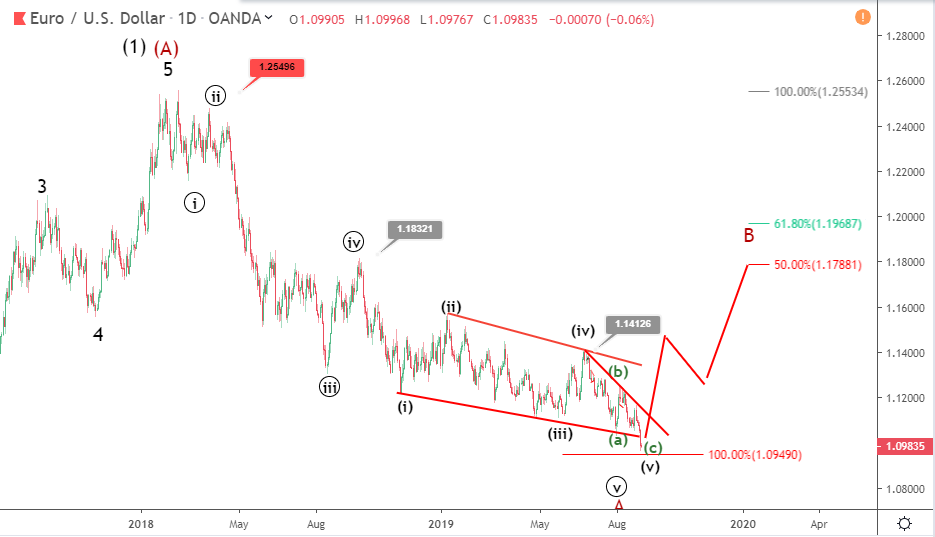 The price dropped slightly below 1.095 as the new chart below shows. 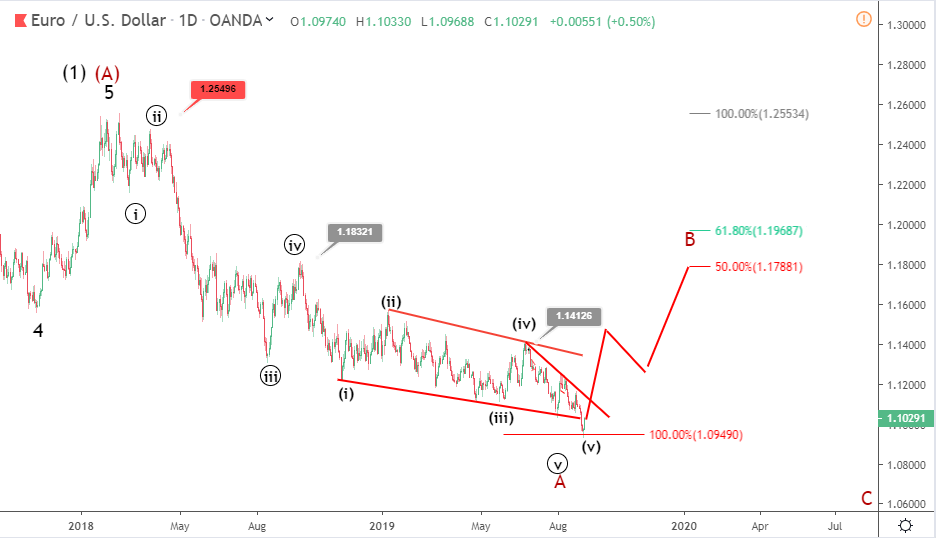 However, the quick recovery into the 1.1050-1.1025 territory meant that the corrective rally still has a chance. If the price breaks above the wave (v) falling trendline, the chance of a bullish correction toward 1.18 will be bigger.