EURUSD has returned from the Post-Fed slump to rally toward the 1.1075 intraday high. The following technical analysis is based on the Elliott wave theory.

September 19, 2019 | AtoZ Markets – The Federal Reserve Bank cut the US lending rates on Wednesday. EURUSD which was close to 1.1075 after a minor recovery quickly slumped to 1.1015. However, the price has returned upside on Thursday, currently about to hit the 1.1075 intraday level. A breach above 1.1075 will most likely be followed by a further surge to 1.125 or even 1.14 especially if the breakout is quick.

The markets reacted mildly after the FED decided to cut rates by 25 basis points to 1.75-2% range. Meanwhile, the bank was upbeat that a moderate intervention should be able to stabilize the economy following recent weakness. The US-China trade war amid other geopolitical struggles has caused trade disruptions and eventually a decline of the global GDP. Central banks are taking cautionary measures. The Fed chair was a bit hawkish and the USD gained slightly. However, there were no convincing clues pointing to whether the Fed will still cut the rate or hike it anytime in the last quarter of the year.

Support Levels: 1.092 remains the major support level and the price is getting away from it. It remains to be seen whether the price will revisit 1.099 before finally returning upside. Currently, a breach above 1.1075 resistance level is very close.

Price has returned upside after the decisions from the ECB and Fed. Technically, we expect a 3-wave bullish correction to 1.18-1.21 after we reckoned that the long term bearish impulse wave that started in January 2018, has ended at 1.099. In the last update, the chart below was used. 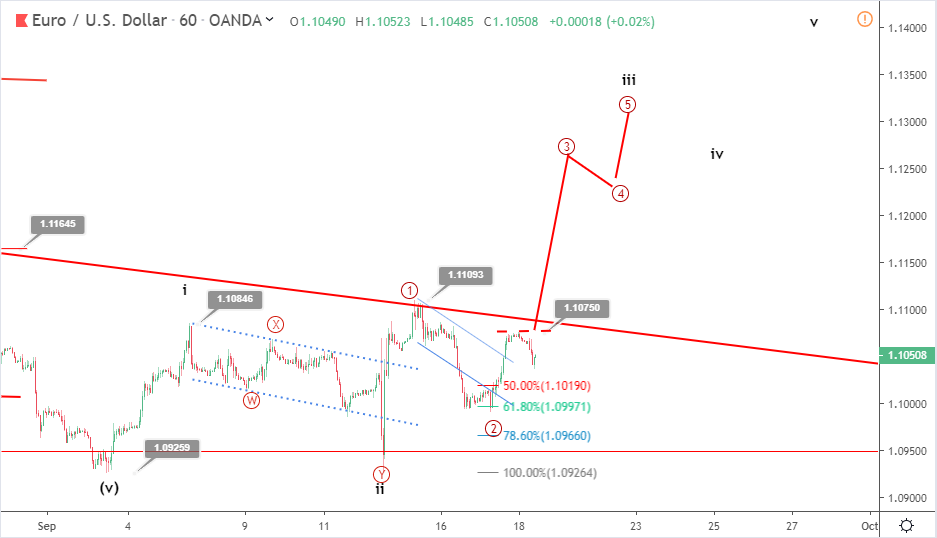 The price is now close to breaking above 1.1075 and the long term resistance trendline as the new chart below shows. The bullish correction is expected to continue to 1.125. 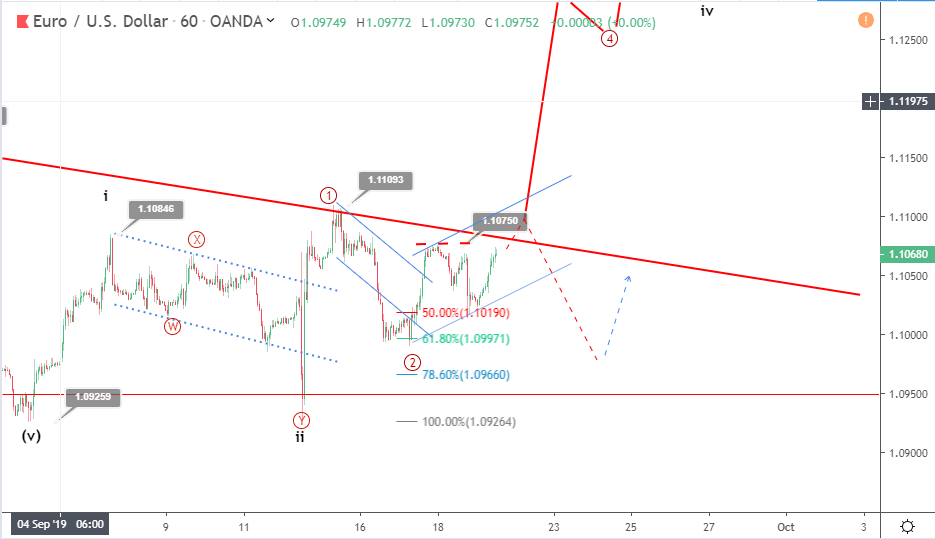 Alternatively, after breaking above the trendline, the bullish momentum might fade. A dip back below the trendline afterwards might be a warning that the wave 2 (circled) is not over yet.