EURUSD tanked to 1.12 after a much improved US employment data. The following looks at what could happen next based on the Elliott wave theory.

July 08, 2019 | AtoZ Markets – The Dollar added to its gains on Friday after the NFP data came much better than expected. The buck gained massively against the major currencies. EURUSD, hours before the news release, oscillated within the 1.13-1.127 minor Fibonacci support zone. Eventually, the price broke below the zone and hit 1.1207. Today, there is a bit of retracement to 1.123 early in the London session.

There are no high impact economic data due to be released this week until Tuesday when the Fed chair speaks at an event hosted by the Federal Reserve Bank of Bosten before the FOMC meeting on Wednesday. The US inflation data will also be released on Thursday before the PPI data on Friday. Due to these economic events, the Dollar is expected to have high volatility. If it gains more, EURUSD will be expected to tank further.

The intraday dip from 1.1412 is emerging into an impulse wave. A 3-wave bullish correction could happen at some stage before the price hit 1.1182. In the last update, we expected the current dip toward 1.1182. The chart below shows that price still goes well with this scenario as the minor impulse wave is about to complete. 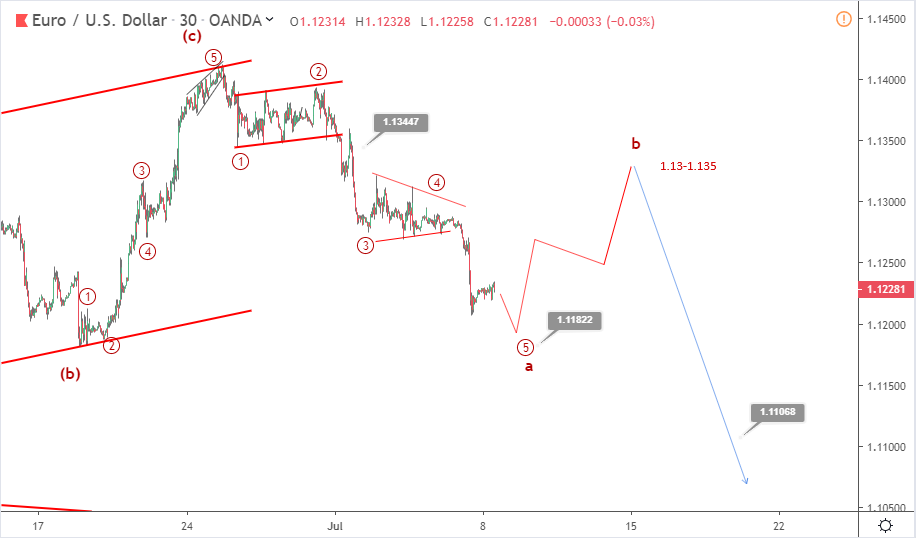 A 3-wave bullish correction to 1.13-1.135 is very much likely to follow before the bearish move continues. The long term trend is still bearish. With the short-term trend now turned bearish, the EURUSD bias is largely bearish. Unless a fast rally above 1.1412 happens, the bears should continue again this week after a minor rally.