EURUSD is dropping deep into the 1.105-1.1025 support zone as the bull loses its advantage. The following technical analysis is based on the Elliott wave theory.

After making an effort to push to 1.125 early in August, the last three weeks have been predominantly bearish for the most popular currency pair. Its price has gone back to where it started this month – 1.1025. On Thursday, there was a quick spike to 1.109 but the bears quickly resisted and pushed back to its lowest in almost 4 weeks. The dip has continued today to make sure August end without any significant gain for the Euro despite tension around the USD. The price is still a bit above 1.1025 and will most likely breach it unless a massive spike happens.

There were no high-impact economic data from the Euro-zone this week. The currency pair is being driven primarily by the overwhelming market sentiment which is still bearish. The Euro-zone economy is helpless at the moment. From the US, the outcomes of the data released this week were mixed. The core durable goods came weaker than expected while the CB Consumer Confidence was upbeat. Much attention will be on next week’s high impact economic events with the US Non-Farm Payroll topping the list.

In the last update, we expected a push above 1.1165 to resume the bullish correction as the chart below shows. 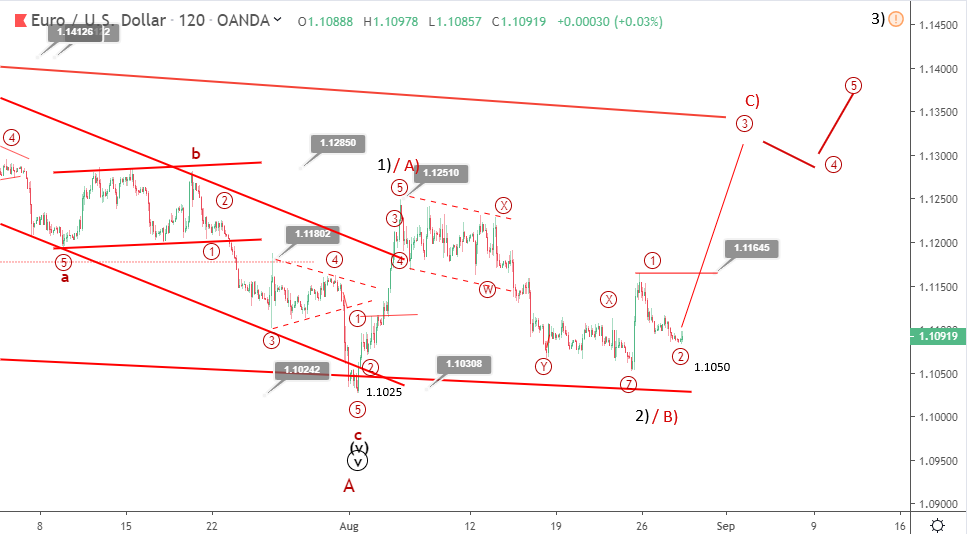 However, EURUSD price dipped below 1.105 instead to invalidate the scenario above. We will now focus on how deep the current dip goes to see what chance the bull has to put in another challenge. Meanwhile, from the long-term Elliott wave perspective, the bearish impulse wave from January 2018 was expected to have ended at 1.1025 after the big bounce to 1.125. The current dip to retest the 1.1025 is putting the wave pattern to a test. However, until the price hit 1.10945 to invalidate this scenario, the bull could hit back with a massive bullish correction as the new chart below shows. 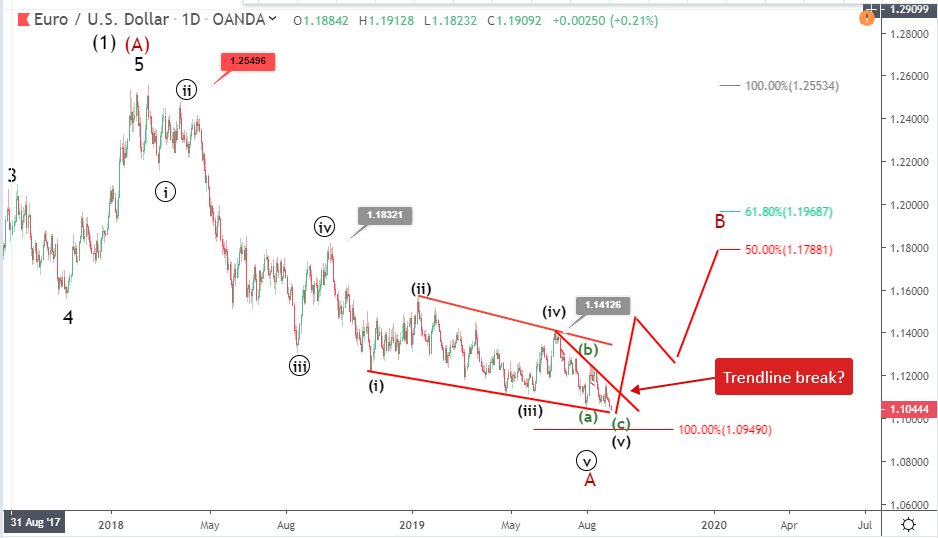 The diagonal 5th is still within its limit and therefore still valid until a break below 1.095 happens. Meanwhile, if price surges above the wave v trendline, a huge bullish correction might follow to 1.14 and 1.18.