EURUSD dropped fast on Friday to hit 1.12 ahead of this week’s Draghi’s speech and Fed’s FOMC. The following insight also includes technical analysis based on the Elliott wave theory.

June 17, 2019 | AtoZ Markets – The most popular currency pair could not sustain the rallies that dominated early June. The US retail sales came with a big surprise on Friday and the major currencies tanked against the USD. The EUR is not particularly strong after failing to maintain any lasting bullish trend in the last 17 months against the USD. There have quietly been some dovish comments from the ECB. Last week, they expressed concern about global growth. The ECB president will give speeches from Monday to Wednesday at the ECB forum in Sintra. The FOMC will come shortly after his speech on Wednesday. It’s going to be a huge week for the Euro-dollar currency pair.

Meanwhile, late last week the EURUSD slumped from 1.1345 after failing in its attempt to break above the 1.1348 resistance level. It broke below the 1.1265 and 1.125 intraday critical levels. It’s safe to say the short term trend is bearish and the potentially huge impacts of the upcoming economic events could drag the pair to 1.105 bearish target level. On the other hand, if the ECB sound hawkish and the FOMC is bad for the Dollar, the outcome will go the other way round. Price broke below the blue rising trendline as expected. Wave a of (v) is probably close to completion as the chart below shows. 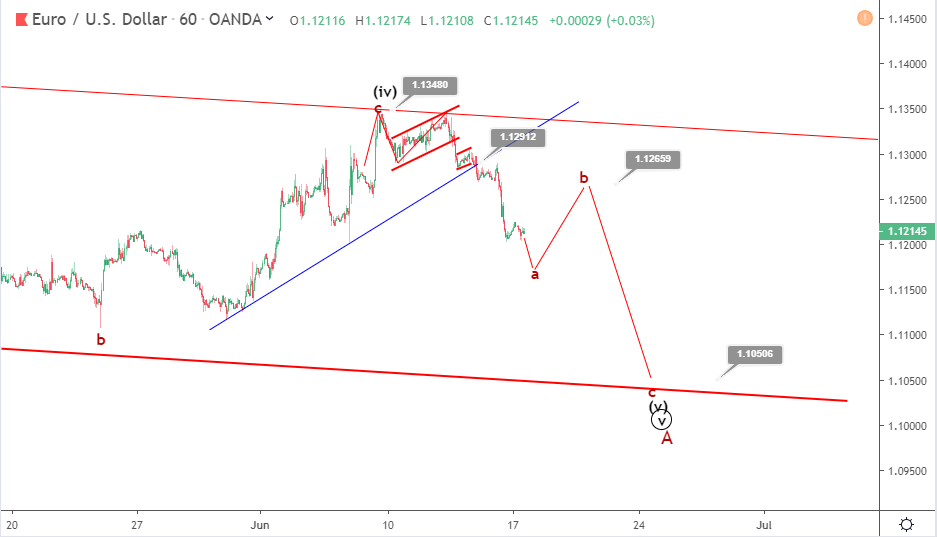 Wave (v) is expected to be any of the simple or complex zigzag patterns. A swing to retest 1.1265 could happen before the next bearish leg to 1.105 completes the 5th wave. However, the series of high impact economic events coming will have a lot to say to validate or invalidate this scenario.