EURUSD has climbed 1.14 after last week bullish run intensifies. Will price rally further? The following give technical insights based on Elliott wave theory.

Euro ended last week bullish after a good run from 1.1215 to 1.14. In the Asian session today, the bullish run was halted a bit after price dropped slightly below 1.14. However in the London session, price has recovered from the Asian drop and climbed back above 1.14. Price has hit a diagonal resistance level and might drop today. How much likely is that?

Meanwhile the US-China trade tension has resurfaced. Dollar is faltering since last week after it dropped against the majors especially toward the end of the week. The Eurogroup will be meeting today as the tension between EU and Italy remains a major concern. What are the technical tools signaling?

Euro is moving as exactly from Elliott wave perspective. Price had completed a diagonal pattern at 1.1215 to probably complete the year-long bearish impulse wave. In the last update, we looked at two most probable scenarios. The first scenario was much more likely and made more sense. The year-long bearish impulse wave is expected to have completed and price should rally further above 1.182 resistance to 1.2. Price is in the corrective (bullish) stage in as much as 1.12 holds unbroken. So far, price has moved as expected. The chart below now focuses on the rally from 1.1215. 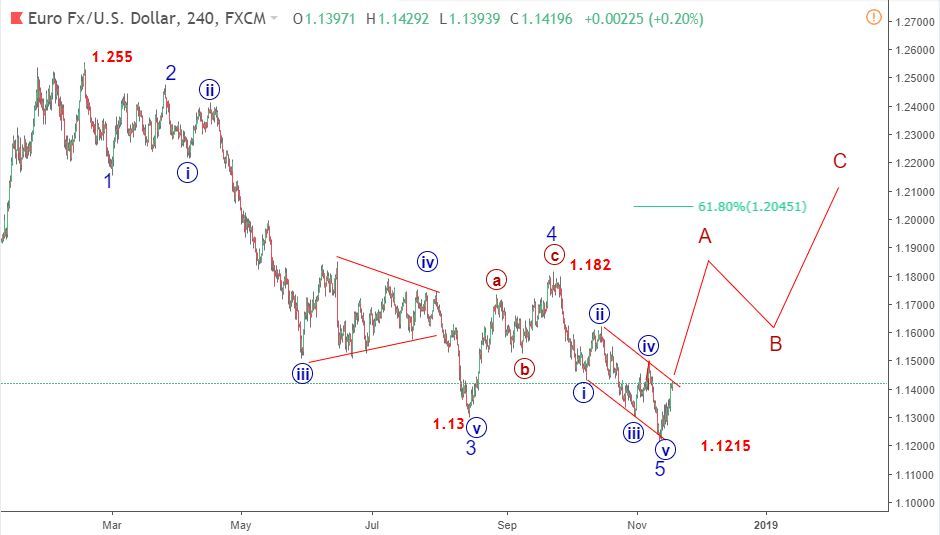 The chart above shows the bearish impulse wave from 1.255 early this year to 1.1215. The 5th wave shows an ending diagonal pattern. Price is currently looking to break out of the diagonal 5th. The bullish run printed in the chart above would be invalid if price falls below 1.14 and breaks below 1.1215. A corrective drop below 1.14 to 1.13 followed by a much bigger bullish breakout above 1.15 might happen. If price follows the wave analysis above, a 3-wave bullish correction should happen to 1.2. The chart below looks at the sub-waves of the rally from 1.1215. 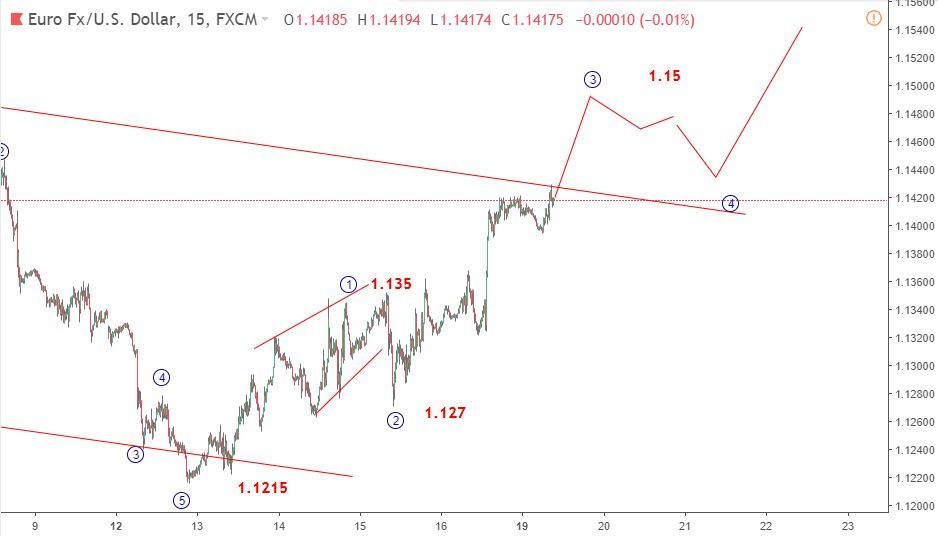 Wave A of a prospective bullish correction to 1.2 is still in motion. The first leg, Wave A, which might end as an impulse wave, could extend to 1.155-1.162. At the current price, a break above the channel is expected to happen to 1.15 followed by a retest of 1.14-1.144 before price advances further.