October 10, 2019 | AtoZ Markets – EURUSD broke above the 1.1 intraday high ahead of today’s ECB minutes and the US-China trade talks. The currency pair spent most of yesterday on the upside after it was supported at 1.094 after the FOMC minutes. The price is now breaking above an important trendline which means it could advance further.

The Wednesday FOMC minutes stated that a few of its members believe that the markets see more accommodation for the future than appropriate. The effect of the FOMC was quickly overshadowed by concerns for today’s US-China trade talks. The two countries have sent their top negotiators for the first time since late July to find a way to end the 15-month trade war. As expected, the markets responded to headlines. Although the outcome might have little effect on the Euro, it could lift or suppress the mood of the greenback which makes it a concern for this pair.

While the meeting is ongoing in Washington, the ECB President Draghi will present the bank’s new forecast and the progress of its plan to ease the zone from the current economic difficulties. Ahead of the minute,  a report from the Financial Times claimed that the bank’s monetary committee has advised Draghi not to resume the QE. Since the easing plan was announced, some members of the committee have openly spoken against it. It seems a rate cut will happen but QE will be a difficult call since members are divisive on the idea. Today’s decision will give clearer roadmap to the October 24 monetary policy meeting.

EURUSD price has advanced to the major trendline. In the last update, we used the chart below to take a long-term view and the possible short term scenarios. 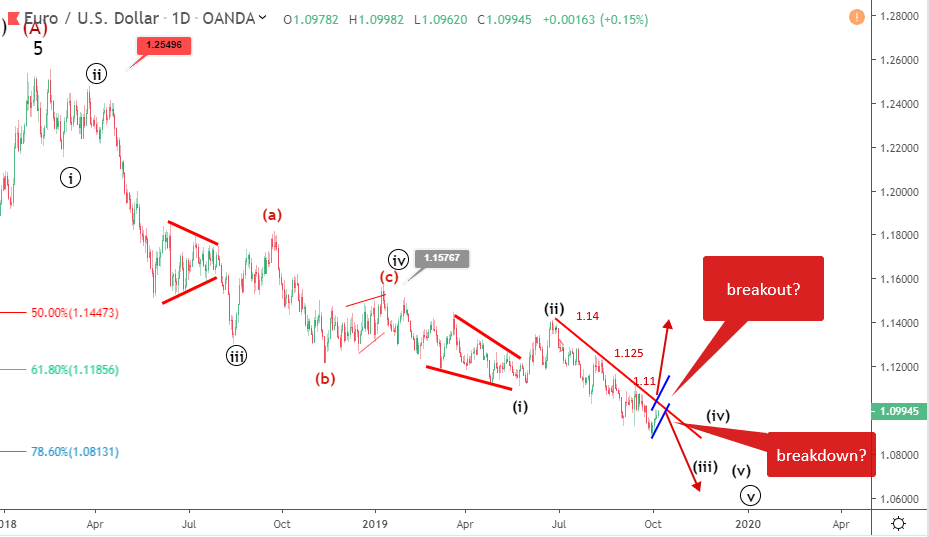 If the breakout becomes significant, we should see a hit of 1.11 especially if the ECB drops the QE plan. The chart new chart below shows the bearish trend might resume. 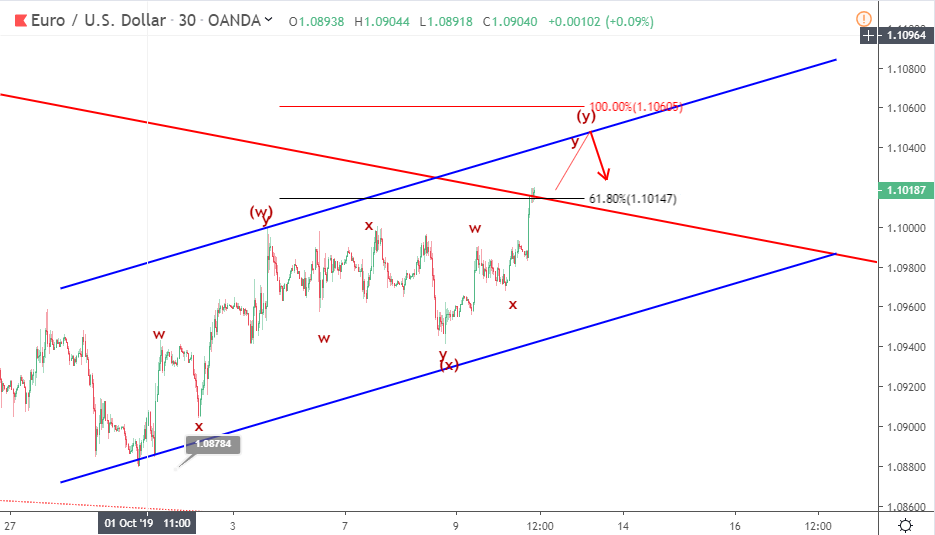 The rally from 1.088 is emerging into a double zigzag corrective pattern with reversal zone at 1.104-1.106. The reversal zone is slightly above the trendline. If viewed from the long term frames, the minor break above could be seen as the wick of a daily or weekly bar. If the price returns fast below 1.1, the EURUSD price could plummet toward 1.088 and below.

Can Facebook Inc. Hit an All Time High of $350 Price Area?