EURUSD has sufficiently broken away from 1.15 price level. Will there be further rallies in the coming days? The following looks at EURUSD analysis based on Elliott wave theory.

Despite the events that have unfolded in recent days, EURUSD bears couldn't continue its earlier advantage below 1.15. The FED rate hike, Italian budget deficit and BREXIT headlines are events that have driven EURUSD downside in recent time. This week however, Euro has find its way above 1.15 which was acting as a draw line between bullish and bearish forces. A sufficient rally above 1.15 would mean at least a bullish correction toward 1.16-1.17.

In the last update, the decline from 1.18 was meant to have completed at 1.143 with a diagonal/wedge reversal pattern. Wedge/Diagonal patterns are often seen at the top/bottom of a trend or correction and it signifies imminent change of direction. According to Elliott wave theory, a correction in the opposite direction follows an impulse wave drive. The chart below was used in the last update. 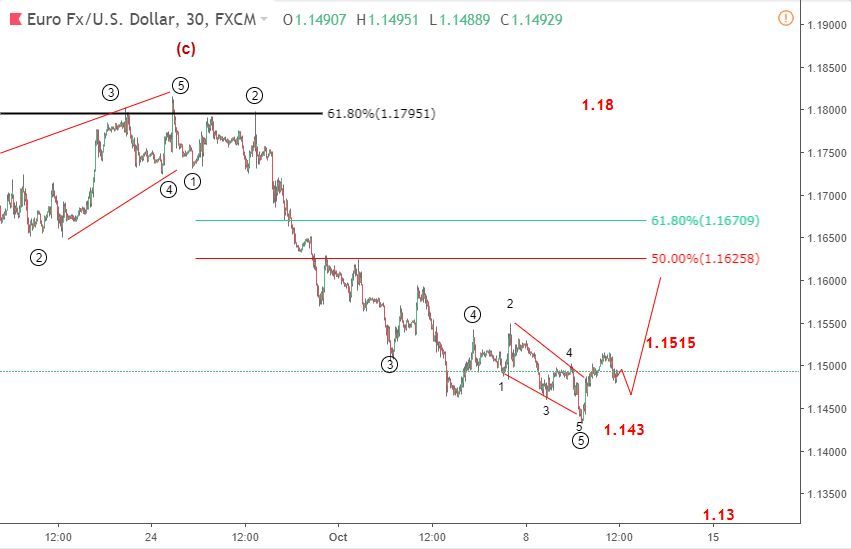 The drop to 1.143 shows a wedge/diagonal pattern. Diagonal patterns are often terminating patterns that signal the end of a trend or correction. price often moves in opposite direction. This diagonal/wedge might have completed the impulse wave drive from 1.18. A break above 1.1515 will see price significantly above 1.15 important support. If price rises as expected, we should see it around 1.16-1.17 where important retracement ratios are found. A bridge above 1.1670 will see price eyeing 1.18. Price could be resisted at the Fib-ratio zone and might drop afterwards below 1.143 en-route to 1,13. Alternatively, if price does not break above 1.1515 but drops below 1.143 instead, a further decline could follow to 1.13.

Price rallied above 1.1515 as expected, now trading at 1.1570 region. Will there be more move upside? The chart below shows the new EURUSD Elliott wave forecast. 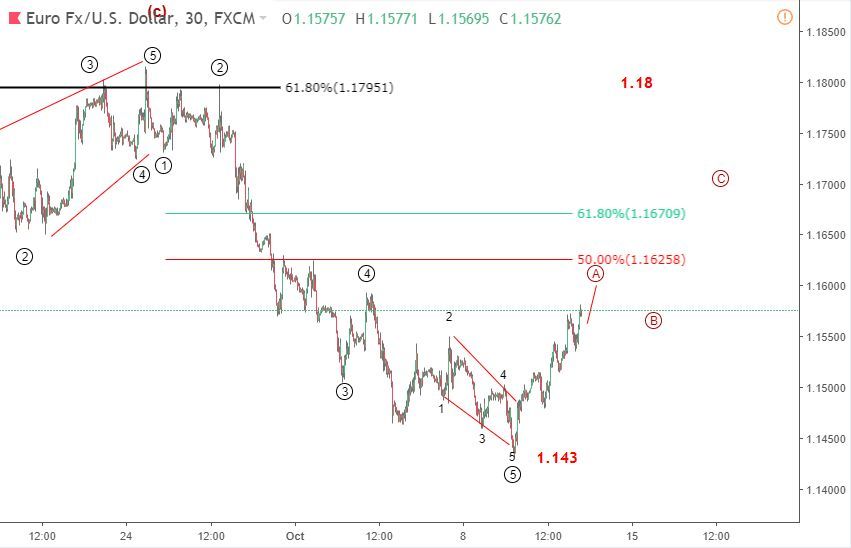 Price is advancing in a trendy manner – taking previous highs without bridging previous lows. This is expected to continue to 1.1625-1.1670 important Fibonacci retracement zone. This zone could act as a resistance. More important is the price pattern developing from 1.143. The pattern is still developing and looks impulsive. The most important resistance level apart from the Fib retracement zone is 1.18-1.185. On the downside, the rally might be interrupted by a bearish correction to retest 1.15 before it continues upside. A break below 1.143 will definitely look bearish again.

Can USDJPY Hold Its Bullish Momentum and Reach 111.00 Key Area?
Forex Crypto
Top 5 Forex Brokers
Top 5 Crypto Exchanges
Your subscription could not be saved. Please try again.
Thank you for subscribing. You will be the first to receive all the latest news, updates, and exclusive advice from the AtoZ Markets experts.
Everyone is reading
SEC Lawsuit Against Ripple May Drag On Until 2022
Ethereum Facing Support Around $2,300 Price Area - Will Strike Upward?
Will the Prices of Gold and Silver Rise After FED Meeting?
close ×