EURUSD has rallied toward 1.1433 resistance after a failed attempt to break below 1.13 support. Euro is probably making a 3-wave bullish correction ahead of today’s employment data from the U.S.

October 2018 | AtoZMarkets – The market is anticipating the outcome of today’s Non Farm Payroll employment report from the United States. This data often affect the near-term direction of USD especially if the outcome deviates largely from the consensus data. The US employment data for October is expected to come at 194k which is 64k better than what was released in September. Market will most likely read into large deviations from 193k.

EURUSD is largely bearish. Yesterday, however, the bulls made the biggest effort since mid-October, and drove Euro from 1.13 support to 1.1444 (around 1.1433 intraday resistance level). From Elliott wave perspective, a bearish impulse wave is developing since January. Impulse waves have three ‘actionary’ waves- wave 1,3 and 5 that move in the direction of the trend (bearish in this case). In-between these ‘actionary’ waves are corrective waves (wave 1 and 2) which move against the trend. At the end of the 5th wave, a much larger correction against the trend is expected.

In the last update, the year-long bearish impulse wave was checked. The outcome was that, the 3rd wave ended at 1.13 in August. The 4th wave ended at 1.182 in October where the 5th wave began. At 1.182, the 5th wave started and is expected to break below wave 3 low at 1.13. The 5th wave is supposed to be an ending diagonal or impulse wave. Yesterday’s rally from 1.13 might just be part of the 2nd sub-wave of wave 5. 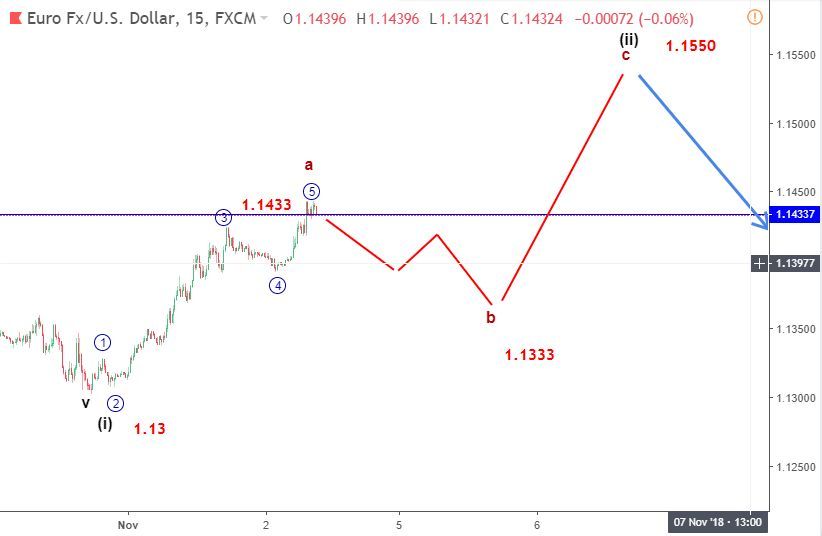 From 1.13 to 1.1433, price is about to complete wave a of (ii) (sub-wave) of the 5th wave. The bullish correction might continue to 1.150-1.155 before price starts dropping to continue the 3rd sub-wave of the 5th wave of the year long bearish impulse wave. A dip to 1.1350-1.1333 support zone might happen before price continues upside. After the 3-wave bullish correction, we should be expecting a fast drop below 1.13.