EURUSD rallied upside early in today's London session. It quickly gained close to 40 Pips and hit 1.1550. However, it couldn't hold on to the early gains as it drops back to 1.15.

October 2018 | AtoZMarkets – EURUSD was bearish last week, dropped to 1.144 after being resisted at 1.162. The drop from 1.162 looked impulsive and broke below 1.15 handle. Price visited 1.143 which was the next support level after 1.15. A break below was expected to see it off to 1.14 and 1.13 handles. However, 1.143 held as a strong support level and price rallied back above 1.15 before it finally closed the week around 1.1515. At the beginning of this week, price was silent during the Asian session but there were fast moves during the London session as price quickly gained and moved 50 Pips above 1.15. The rally didn't last as price drop to 1.15 and looking to go below once again. 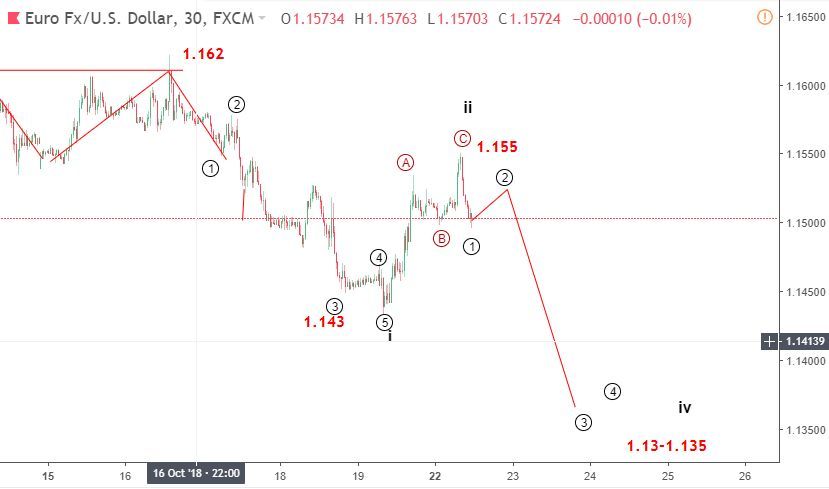 The rally from 1.143 to 1.155 looks corrective. However, it's not very certain that the correction is over as wave C (circled) looks much smaller than its corresponding wave A (circled). The current dip from 1.155 looks assured. If the next intraday rally from the current price level is corrective and stays below 1.155, a big bearish breakout could happen below 1.15 to retest 1.143 again. A break below would most likely end up at 1.135-1.13 bearish targets. There is an alternative technical view outside of the Elliott wave scope, which shows a bullish likelihood. If price breaks above 1.155 fast, the following scenario might play out. Which of these technical forecasts do you think is more likely? Share your thoughts in the comment box below.