Euro is trading close to 1.12 after the fast fall below 1.13, to continue the year bearish trend. Will price drop below 1.12 today?

After last week bearish breakout below 1.14 hit 1.13, price continued the bearish move yesterday. EURUSD dropped fast below 1.13 support for the first time since June. After 1.13, there is a significant support at 1.12 which also has to be taken out to continue the bearish trend. The current bearish leg started from 1.15 which means Euro dropped more than 250 Pips (-2.3%) in just 4 days. Technical analysis still favors more downside move below 1.12 before a genuine bullish correction would happen.

Euro was relatively quiet in today’s Asian session though it took a breather after yesterday’s sell off hit 15 Pips away from 1.12. Before the London session, price was 50 pips away from 1.12 to stay exactly half-way between 1.12 and 1.13. Early in the London session, price was pushed to 1.1225 before getting back to 1.1250 where the Asian session peaked. It seems price is trying to adjust, stabilize a bit and decide the next direction – bullish correction or bearish continuation.

In the last update, we looked at the year long impulse wave pattern and concluded that the current drop is part of the 5th wave of this trend. There were two scenarios. One looked at the possibility of an ending diagonal 5th wave which was expected to stay above 1.12. This scenario suggests the year long bearish impulse wave would end above or at 1.12 and price would start a big bullish correction toward 1.182-1.2. The second scenario looks at further falls below 1.12 to complete an impulsive 5th wave around 1.10-1.1055. There was also the possibility of a Euro-Dollar parity which might see the bearish trend continue till next month or probably next year. Though price is currently above 1.12 but there are no reversal price patterns to show any form of rejection. Unless there is a bold move toward 1.13, we might see 1.12 eventually taken out. The chart below shows the wave pattern of the current bearish leg from 1.15. 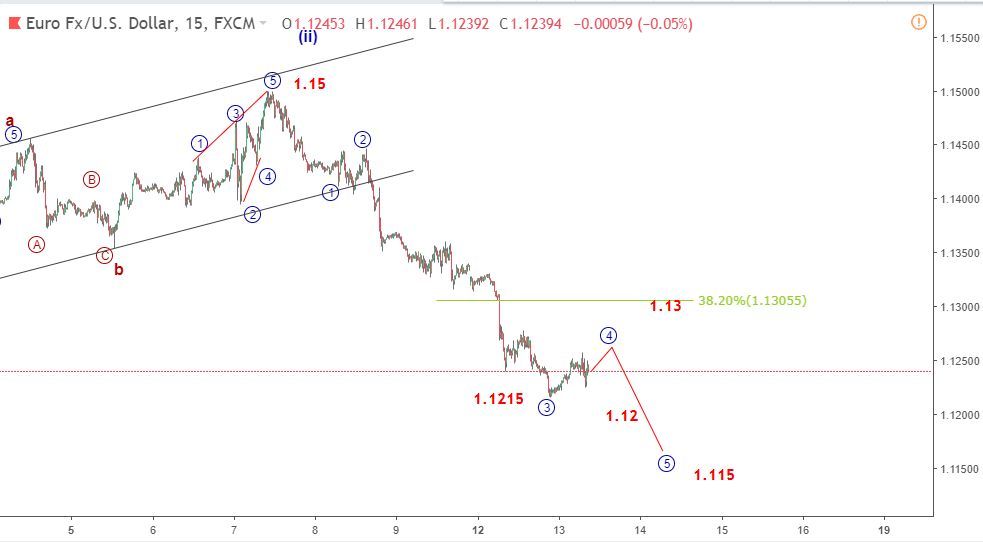 The chart above focuses on the dip from 1.15 to 1.1215, Price might be printing a micro – wave (1-3) of this degree (part of the sub-waves of the wave (iii) of the 5th wave of the year long bearish impulse wave). The 4th wave of this degree which might hit 1.1270 is expected to stay below 1.13. If however, price shows a reversal price pattern at the current level and price pushes above 1.13 as a result, it might go further to 1.15 to validate yesterday’s first scenario.