EURUSD has dropped to mid 1.1300s after completing a bearish reversal pattern. The following looks at what could happen next based on Elliott wave theory.

March 01, 2019 | AtoZ Markets –  After a better than expected US advanced GDP on Thursday, the Dollar rallied across the board. EURUSD which has been slowing down around 1.14-1.142 this week dropped quickly below 1.14. The dip has continued today into the mid 1.1300s. Investors are upbeat on the US-China trade agreement. Meanwhile the Fed’s decision to keep rates unhiked might limit the greenback. ISM manufacturing PMI data from the U.S will come later today, the market expects a worse data that the previous.

Since the turn of this year, EURUSD has spent most of the time between 1.13 and 1.15. If this behavior continues in March, that would definitely be one of the least volatile 3-months by the most popular currency pair. From technical analysis perspective, price might be on its way to 1.13 after completing reversal patterns at 1.142. The current up-swing started at 1.1235 and looks like the correction of the 1.1515-1.1235 impulse wave dip. How far could the expected dip go?

In all of this week EURUSD Elliott wave analysis updates, we had expected 1.14-1.144 to act as a strong resistance zone and probabaly see off a price reversal. The rally from 1.1235 was projected as a double zigzag corrective pattern formed within a rising channel. On Thursday, price completed an intraday double top reversal pattern at 1.14. The chart below was used. 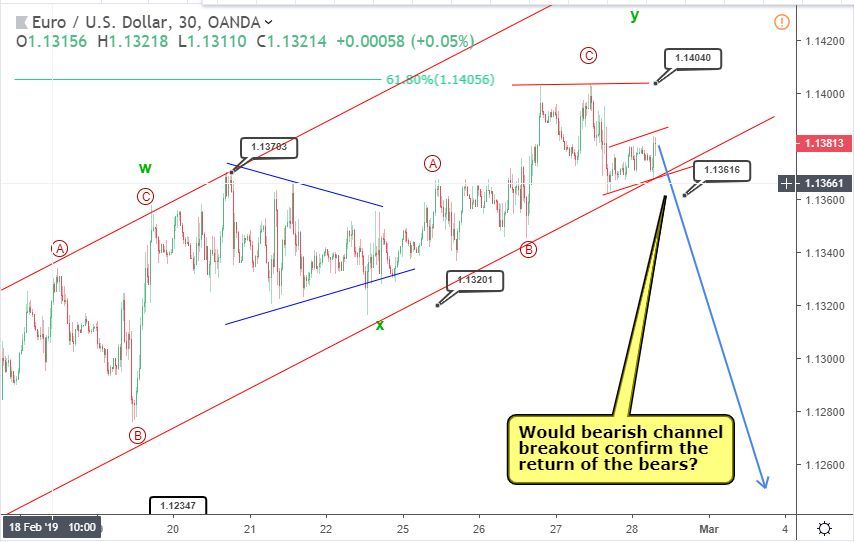 A break below 1.136, where we had the double top and rising channel breakout necks, was expected to lead to further falls. The breakout didn’t happen and price rallied further upside – 20 pips above 1.14. However, price was still held within the reversal zone till the US GDP data dragged it below 1.14. Meanwhile, at 1.1420 price completed another popular reversal pattern shown in the chart below. 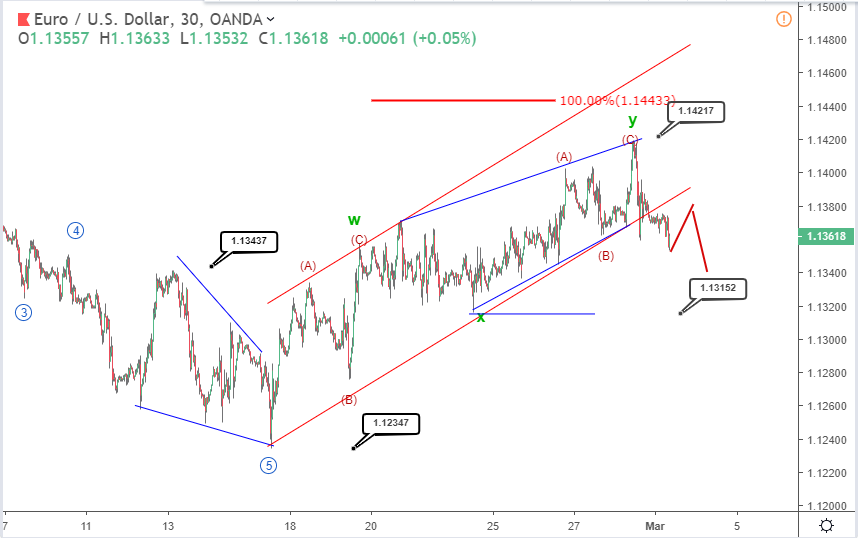 Aside the double zigzag pattern, price also completed a wedge/ending diagonal pattern. The wedge has been broken downside, there might be a bit of retracement  to 1.1380-1.14 before the expected fall. If a free fast fall happens, price should dip below 1.1235. However, price reaction around 1.13-1.1315 needs to be watched closely.