EURUSD gains bullish traction to 1.14 as it continues the late May positive run. The following technical analysis is based on the Elliott wave theory.

June 25, 2019 | AtoZ Markets –  The Euro-dollar broke above the 1.1348 resistance level to hit 1.14. After last week’s Fed meeting, the USD was in trouble and tanked across the board. The Fed’s comment was dovish. EURUSD resumed the bullish correction that started late May after failing to break below the 1.11 support level. Price is still within the bearish territory with possibilities for another dip but we might see a much higher bullish correction as it could get attracted to the 1.145, 1.1515 and 1.157 resistance levels.

The Consumer Board will release its Consumer Confidence Index for June today just at the start of the New York session. The data for June is expected to fall to 132 from May’s 134. A big deviation from the expected outcome could cause a temporary price deflection.

There was a moderate rally on Monday as price advanced gradually from 1.137 to 1.14. In the Asian session on Tuesday, it went about 12 pips above 1.14 before dropping below the same price level just before the London session started. It seems an intraday top is formed at 1.1412 and price might start a minor bearish correction below 1.14 to 1.135 or below. To the downside, there might be a retest of the 1.133-1.135 support zone. If the price is well supported at this zone, a further push toward 1.145 will be expected. However, a dip below the zone could see the price dropping toward 1.18-1.12 support zone.

EURUSD has probably completed a bearish impulse wave from 1.11. The impulse wave which started in January 2018 ended in late May. At 1.11, where the pattern ended, there was a double bottom reversal pattern. The bears were expected to drag to 1.105 to complete a proper ending diagonal 5th but the last FOMC pushed to 1.14 to invalidate the expectation we had in the last update. The break above 1.1348 ended the score. 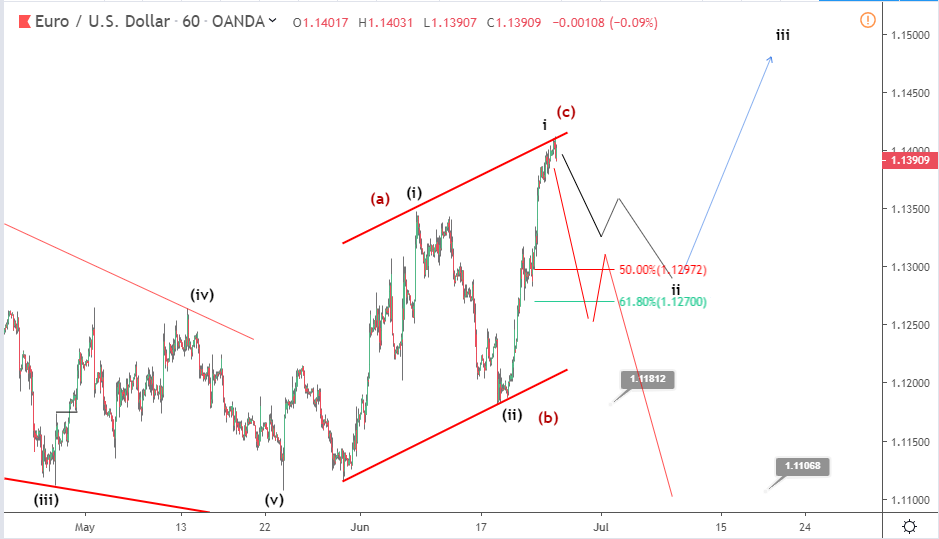 The rally from 1.11 still looks corrective with a classic zigzag pattern. If the price is resisted at the edge of the channel and falls, a strong dip below 1.11 could happen to continue the long term bearish trend. On the other hand, the first leg of the bearish correction could end with a zigzag (if complex), an impulse wave or an ending diagonal. If any of these is the case, a minor dip to 1.13-1.127 could happen before the bullish correction continues. If the price drops from the current level, we will watch for the wave development of the dip.

Bitcoin Nose Dive Below $32,000 Price Area - Bears to Continue Further?
Forex Crypto
Top 5 Forex Brokers
Top 5 Crypto Exchanges
Your subscription could not be saved. Please try again.
Thank you for subscribing. You will be the first to receive all the latest news, updates, and exclusive advice from the AtoZ Markets experts.
Everyone is reading
Is Forex Trading Illegal in India? Can Indians Trade Forex Legally?
Ripple Found Support Around $0.62 Price Area - Will Recover Upside?
Stellar in Talks to Acquire MoneyGram – Bloomberg
close ×