EURUSD dropped below 1.13 for the first time since June 2017 as the year's bearish trend gets even stronger. Will price falter further? What are the next bearish targets?

It's clearly printed on the chart that EURUSD is bearish this year. The trend is well maintained as price continues downside after every bounces. The latest bounce was a 200 Pips move from 1.13 to 1.15 in the first five trading days of November. Between 15th August and 31st October, the bearish trend was rejected at 1.13 twice. This level has therefore been a big level of significance for the bears. A break below 1.13 was generally expected to cause a new low since June. Price will be expected to hit 1.12 and 1.11 handles as the year closes bearish for the Euro.

From Elliott wave perspective, the 4th wave of the year long bearish impulse wave ended at 1.182, the 3rd wave ended at 1.13. The 5th wave which started at 1.182 was expected to drop below 1.13 unless it would be truncated. The break below 1.13 suggested that the bearish 5th wave has a potential of hitting 1.12 or below. The 5th wave of an impulse wave should either end with an ending diagonal or an impulse wave. Here are two scenarios covering these two possibilities. 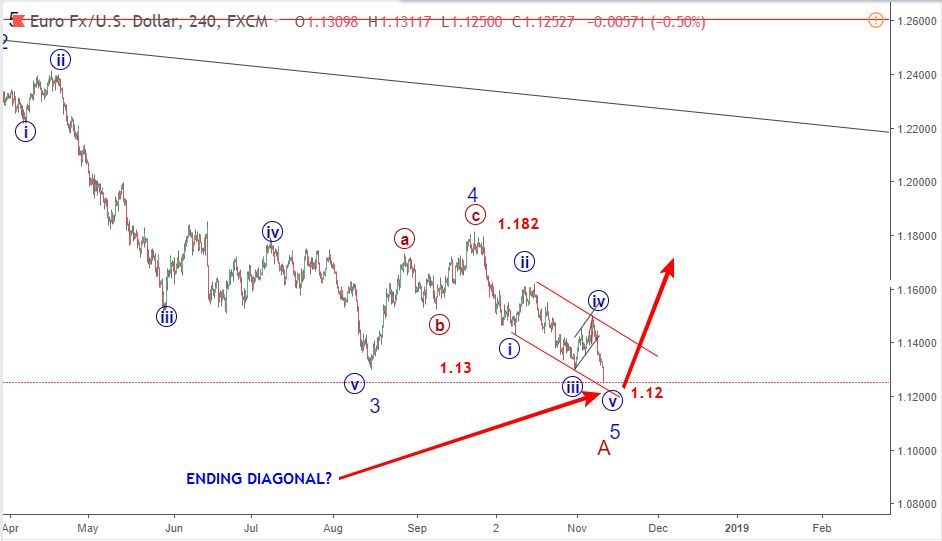 The chart above shows how an ending diagonal 5th wave might complete the year long bearish impulse wave. The 5th wave in this scenario, should be held above 1.12. A strong break below 1.12 would invalidate this scenario and set Euro for an impulse 5th wave which, as shown in the next chart, might lead to a parity with Dollar. If the diagonal 5th wave holds above 1.12, a break above its wave ii-iv (circled blue) would lead to price aiming 1.182 wave 4 resistance, before the year ends. 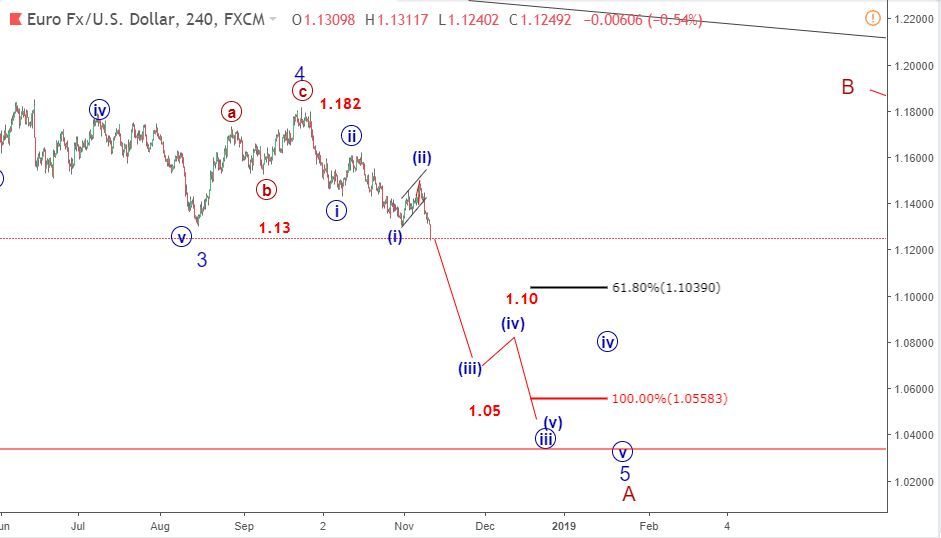 If price drops below 1.12 to invalidate the first scenario, the 2nd scenario will most likely happen. The 5th wave developing into an impulse wave might extend to 1.055-1.10. If price moves this way, we might see the bearish trend of this degree continue till early next year. A drop to 1.0 is also likely if the 5th wave extends more than expected. Basically, after 1.12, the next price levels to watch out for are 1.10 and 1.1055 if this scenario holds.