EURUSD is sliding below 1.12 after topping at 1.125. The following looks at what could happen next based on the Elliott wave theory.

August 12, 2019 | AtoZ Markets – Last week, China devalued the Yuan. This was generally seen as a retaliatory measure amid the ongoing trade war with the US. There are reports circulating that the US and China may not resume trade talks or at least not any time soon. If this exerts much pressure on the dollar, it could start a wild bearish correction. The Euro-zone has its own challenges. The new UK PM, Boris Johnson might force a move without a deal but there are reports that the MPs might force him to seek an extension instead.

Meanwhile, the Euro was a bit silent last week. The currency pair peaked at 1.125 after gaining over 200 pips to breathe out of the bearish pressure. Despite big moves on other USD pairs last week, EURUSD spent most of the time oscillating around the 1.12 handle.

The currency pair started this week around 1.12 before being pushed to 1.117 (last week intraday support level). It remains to be seen whether the bullish correction from 1.1025 will continue soon or price will dip further.

From the perspective of the Elliott wave theory, EURUSD is making a 3-wave correction. The long term bearish impulse wave that started in January 2018 completed at 1.1025. A bullish correction to 1.18-1.21 is expected. In the last update, we looked at the current correction from 1.125 and drew two scenarios. The first scenario is playing out as the new chart below shows. 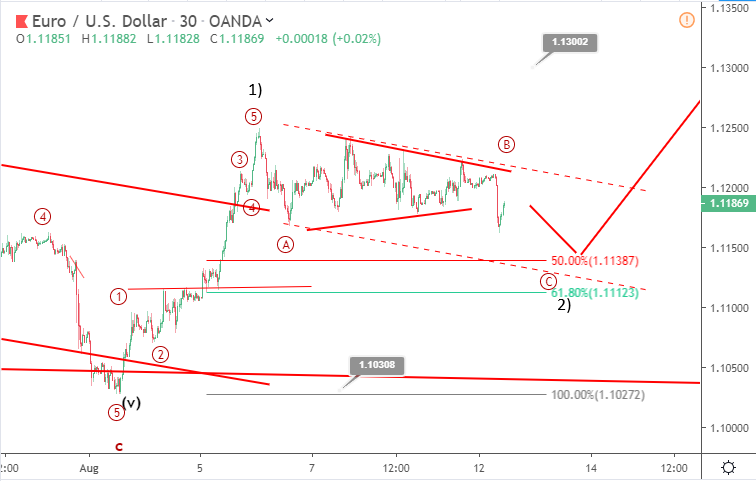 The correction could still continue to 1.111-1.114 Fibonacci zone before the price resumes the bullish run. A break above the wave 2) channel should confirm the end of the correction. This forecast will be invalid if the price drops below the 1.1025 low.