EURUSD dips further to 1.1150 as the US-China trade war intensifies. Will the currency pair hit a fresh year low? The following insight is based on the Elliott wave theory.

May 21, 2019 | AtoZ markets – The US-China trade war has intensified following the latest report regarding Chinese tech giant Huawei. After being accused by the US government of having ties with the Chinese army, some big American companies have now suspended business activities with the tech firm. Huawei and other Chinese tech companies are now expected to hit back in what could be the start of ‘tech cold war’. Technology companies stocks are already feeling the heat. There are now fears that the trade war could drag much longer as there have not been any arrangements for new trade talks between the two world’s largest economies.

EURUSD price continues to dip as the USD gains further from the trade war situations. The buck’s safe-haven appeal is being boosted by the absence of significant progress in the trade talks which now weighs on the markets especially tech stocks. The FOMC will meet tomorrow and there are concerns that the current trade situations could influence their decisions and therefore lead to a rate cut. The Euro-zone economy, on the other hand, still looks gloomy. The German economy is still struggling while Italy’s debt profile may keep it at loggerheads with the EU. The Brexit concerns still weigh on the Euro. The currency pair might hit a new low this year and therefore, the lowest price in two years.

The long-term bearish impulse wave is very clear on the EURUSD price chart. After bouncing off the 2019 low at 1.111, the resultant rally was not strong enough as the Euro-zone struggles while USD gains more momentum. In the last update, another ending diagonal was expected to end at 1.1075 before a new bounce happens. Technical reversal patterns were also formed between 1.1265 and 1.1225. The chart below was used. 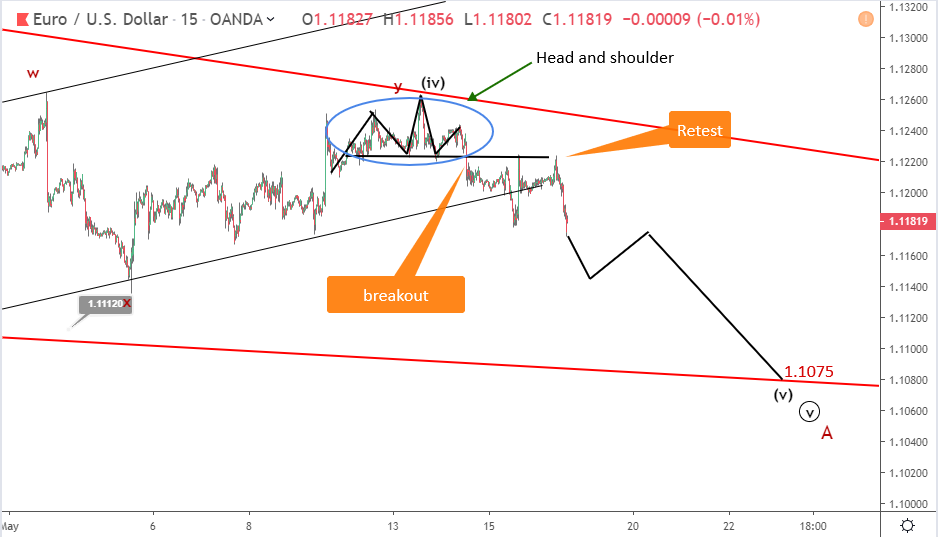 Wave (iv) of the diagonal ended at 1.1265 to make a double top reversal pattern. The chart above also shows a less degree head and shoulder reversal pattern with a neckline at 1.1225. After the retest of the neckline, the price has dipped further as the chart below shows. 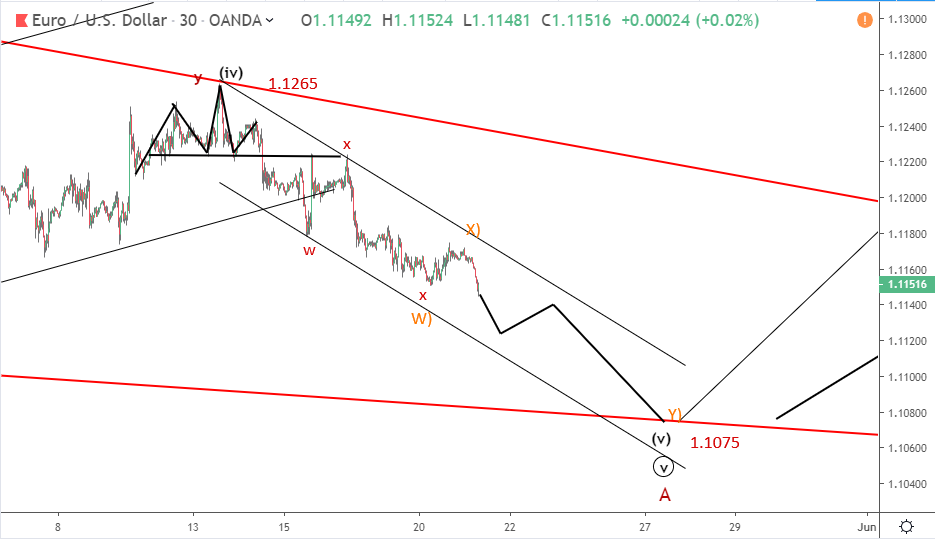 A complex zigzag pattern with minor rallies is very much likely to complete as price heads to 1.1075-1.1050 or maybe lower. If there is a strong reversal pattern at this zone, events might change and see EURUSD mounting serious rallies toward 1.18-1.21 long term bullish target.