EURUSD has slumped this week, dropping about 130 pips. The market awaits inflation data from the U.S. The following give insights based on Elliott wave theory.

December 12, 2018 | AtoZ Markets The Euro has dropped this week, partly influenced by UK PM Theresa dropping house election on Brexit and the success in the ongoing US-China trade deal. The dollar rallied after President Trump announced a notable progress in the trade talks with China. This week, EURUSD has dropped about 130 Pips to hit very close to 1.13 important price level. Today, the US department of labor will publish its consumer price index report for November. Inflation in the country is expected to drop to 2.2% annually in November from 2.5% reported in October. Market will respond to deviations from the expected 2.2%.

On the technical front, since the last week of November, Euro has not broken out in any certain direction. It’s making big up and down swings while confined in a wide range. A triangle pattern was suspected following the rally from 1.1215 where the year-long impulse wave might have ended.

After the year-long impulse wave completed with an ending diagonal pattern at 1.1215, price has surged. We expected a swift rally to 1.2 in the intermediate-term. The upswing started well to 1.1470 but price has not been able to compliment the move as it dropped deep to 1.127 and followed by a big rally to 1.144. In the last update, when price was at 1.144, it was expected that ”a dip to 1.13-1.127 zone is still very much likely in as much as price stays below 1.147”. What next after the drop? 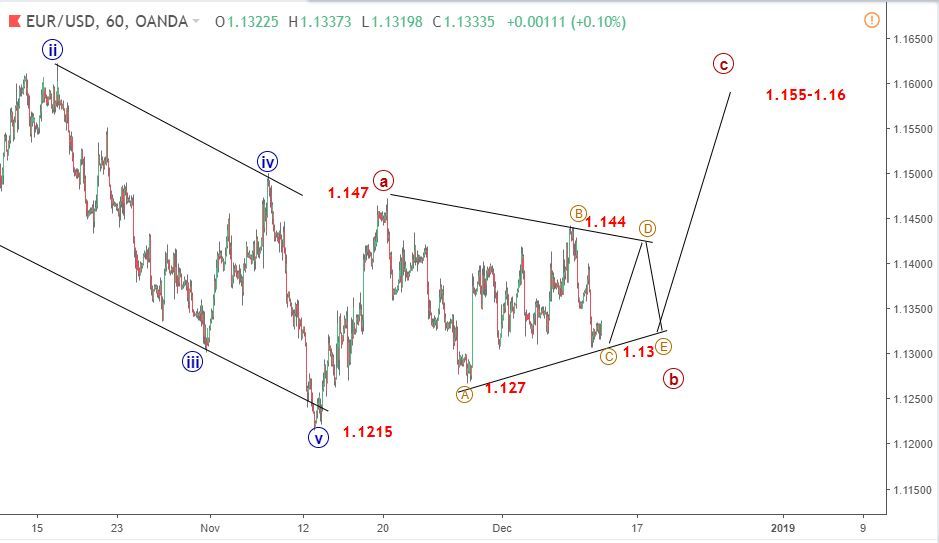 The drop from 1.144 to 1.13 fits the triangle forecast perfectly. However, it’s still not clear if a triangle will complete as expected. There seems to be two more legs to go. There are many ways price can move aside this. Another pattern that wave b (circled) can complete is a flat pattern which should stay above 1.127 and then rally to break above 1.144 en-route to 1.155-1.16. If price rallies back to 1.14 and then drops back, the triangle will then fit perfectly. The intermediate degree still points upside with targets at 1.155-1.16. However, a dip below 1.127 will cause a big threat to the bulls. Below 1.1215, the bullish scenario is invalid.

Tags Elliott wave analysis EURUSD
Forex Crypto
Top 5 Forex Brokers
Top 5 Crypto Exchanges
Your subscription could not be saved. Please try again.
Thank you for subscribing. You will be the first to receive all the latest news, updates, and exclusive advice from the AtoZ Markets experts.
Everyone is reading
Top 5 Forex MT5 Indicators for 2021 you should try
Top 5 Cryptos to Watch in Quarter 2 2021
Bitcoin Facing Resistance Around $60,000 Event Area - What Next?
close ×